According to the most recent Centers for Disease and Prevention reports, 9.5 percent of U.S. children have been diagnosed with attention deficit hyperactivity disorder (ADHD). This week, October 14-20, marks ADHD Awareness Week, and SheKnows tapped Ben Glenn of Indianapolis, Indiana — an ADHD expert, father of two and author of the upcoming release, Simple Answers to Commonly Asked Questions About ADHD — to offer a new way to look at ADHD.

Seeing the positives
of ADHD

According to the most recent Centers for Disease and Prevention reports, 9.5 percent of U.S. children have been diagnosed with attention deficit hyperactivity disorder (ADHD). This week, October 14-20, marks ADHD Awareness Week, and SheKnows tapped Ben Glenn of Indianapolis, Indiana — an ADHD expert, father of two and author of the upcoming release, Simple Answers to Commonly Asked Questions About ADHD — to offer a new way to look at ADHD.

What is your approach to explaining ADHD and why do you believe it’s radical? 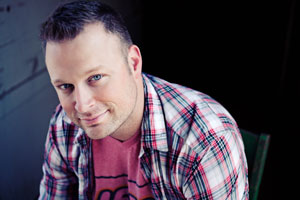 Ben Glenn: I’m passionate about encouraging parents and teachers to think outside the box. I believe that ADHD is a special disorder because it has so many positive characteristics to offset the negative ones. Getting a diagnosis of ADHD is not the end of the road; it’s the beginning of an amazing adventure. It’s definitely not all fun and games, but with support, treatment and having people in your life who understand how the ADHD brain functions, anything is possible.

Don’t discount the dreams your kids might have of being artists or musicians or jugglers instead of doctors and lawyers and architects — they can be extremely successful doing something completely unorthodox with their lives. Getting As in school and a college degree is no longer the only road to success. Educate yourself, network with others in the same situation and stay strong.

How common is ADHD today and why so many cases?

Glenn: Statistically, ADHD affects about 3-5 percent of preschool and school aged children. Because we know that ADHD is not something you “grow out of,” it’s also fair to say that overall, 3-5 percent of the adult population in the U.S. also has ADHD. There is still no information about the true cause of ADHD.

What are your thoughts on those who say ADHD is overdiagnosed and many kids are overmedicated?

Glenn: It can “feel” like ADHD is overdiagnosed, but then again there are statistics that show over and under diagnosis. I don’t believe that ADHD is overdiagnosed. What has happened is that testing is more readily available now than ever and people are more aware of ADHD. Also, there have been several studies that have found statistical proof that a genetic link exists between parents and kids diagnosed with ADHD.

Is ADHD a real struggle and something that impairs the day-to-day lives of people who have it? Absolutely. And if a diagnosis helps the person have access to treatment and to gain a better understanding of what makes them tick, then I’m all for it. But a child cannot learn to function better with ADHD through medication alone. There needs to be a number of things going on concurrently, such as, behavior modifications and educational accommodations.

ADHD is not a fake disorder developed by the drug companies to make money selling drugs. I like a good conspiracy as much as the next person, but that one is just silly.

The perks and pains

What do you believe are the peaks and pitfalls of ADHD?

Glenn: The pitfalls: ADHD is the consummate disorder of time management. People who have it are time blind. Add to that impulsivity and distractibility and it’s not hard to see why someone with ADHD is not able to complete a task without exerting a lot of effort. Getting organized, prioritizing their activities, being on time, and completing tasks are a constant struggle. In school children, hyperactivity is a great challenge in the classroom. Add to that extreme forgetfulness and you can see how frustrating this disorder can be.

The plus side: People with ADHD are usually amazingly creative. They are intuitive, and for the most part full of positive energy. When it comes to working on something that they are excited about, people with ADHD are almost superhero-like with their hyper focus. They tend to be generous and compassionate. They often have a great sense of humor, and the ability to inspire others. With the right attitude, helpful accommodations and the right support system, kids with ADHD can become very successful.

What do you wish other parents knew or understood about ADHD? Share your thoughts and stories in Comments below.