Actress Mayim Bialik not only plays a scientist on The Big Bang Theory, but she also has a Ph.D. in neuroscience to back it up. 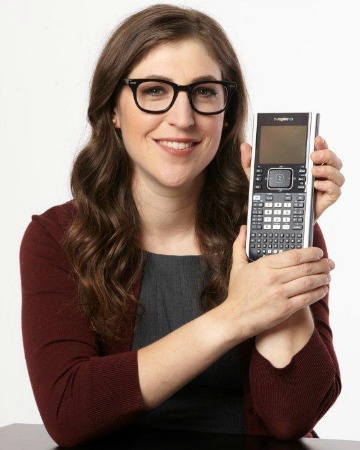 Bialik has partnered with Texas Instruments as an ambassador to inspire students to pursue math and science studies and as spokeswoman for TI-Nspire CX graphing calculators.

We had the opportunity to talk to actress Mayim Bialik about her relationship with Texas Instruments (TI), the importance of teaching your children about science and more.

Bialik teams up with TI

While many celebrities are spokespeople for different products, it seems that Bialik’s relationship with TI is a perfect fit. With a desire to inspire future scientists, Bialik is also an advocate for TI’s Science, Technology, Engineering and Math (STEM) initiatives.

“I am the brand spokesperson for Texas Instruments for the second school year. I’m not just a familiar face but a female face for science. I speak to schools, teachers and students. TI is out there not just as an organization that wants to sell fantastic products but also that is dedicated to support schools that don’t have the resources,” says Bialik. 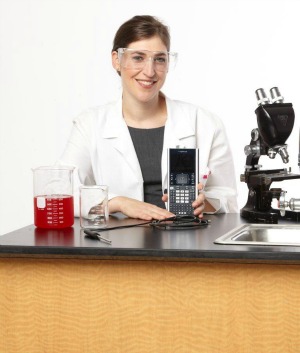 The careers of tomorrow

The 36-year-old actress, mom and part-time teacher is in a unique position because not only does she play a scientist on The Big Bang Theory, but she also has a Ph.D. in neuroscience in “real” life.

“It’s wonderful,” Bialik says of her role as neurobiologist Amy Farrah Fowler. “It’s obviously easier for me to memorize terms for the role because I already have learned them back in grad school. It’s fun to be a female scientist and forge paths as women before me have (but not as many) and be able to portray a positive role model.”

Bialik is an advocate for the importance of math and science studies in our schools.

“When we look at the careers of tomorrow, they are primarily based in science, technology, engineering and math. It’s important that we concentrate on these skills, not just because they are necessary for the future but also to make a well-rounded student,” explains Bialik.

While TI and other organizations are pushing for more emphasis on science, technology, engineering and math in schools, parents need to do their part at home as well.

“One of the best things in our house that we do with math and science is cooking,” the mother of two explains. “There is a tremendous amount of simple knowledge that can be learned through cooking — everything from measuring things to understanding how and why things combine. You don’t have to know all the technical reasons behind it to explain how things work to your children. For example, you can easily explain how when we add baking soda to something else, the tiny particles in it combine to make things fluffy.”

What’s next for Mayim

The multi-talented Bialik is always working on something new. For several years, she has been outspoken about the benefits of a plant-based lifestyle and she’s now working on a vegan cookbook.

The yet-to-be-named cookbook is slated for publication in 2013. You can read more from Bialik (including some of her recipes) on her blog at kveller.com.

Are We There Yet? star Essence Atkins talks about motherhood, “me time” and more
How Ali Landry balances mommyhood and Hollywood
Jillian Michaels dishes about fitness for moms, snacks for kids and more