Some of the rules of childhood have been repeated so many times that even as adults, we find ourselves shaped by them. 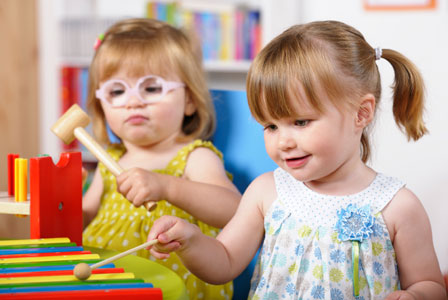 Teaching our children to share, take turns and play nicely seems like the best way to parent but there’s another way of thinking that may have some parents questioning their methods.

Teaching children how to get along with others would seem to be the best way to turn them into competent, well-adjusted adults. What if children actually did better in life when they were given more freedom in choosing how to react to each situation instead? Heather Shumaker is the author of It’s OK NOT to share… and Other Renegade Rules for Raising Competent and Compassionate Kids. Her ideas may seem radical, but they just may change your thinking about social learning.

Learning to be social creatures begins early, and Shumaker’s book is aimed at the toddler and preschool crowd — from ages 2 to 6. The beginnings of social skills and people smarts are here, and will be carried forward through childhood and beyond.

The book is based on the philosophy and teaching methods of the School for Young Children (SYC) in Columbus, Ohio that Shumaker attended as a preschool child. Children at the SYC are encouraged to get messy, climb trees, roughhouse, mediate their own conflicts, express all feelings, explore their creativity and take risks. The core philosophy is centered around child-directed, child-chosen methods of play.

How many times as a parent have you told your children — or others — to make sure that they share? Sharing toys because they are forced to share doesn’t teach a child how to make the determination he is “done” with something. Even when another child is waiting, learning to control and decide when a task is finished is an important skill. The child has learned to listen when his mind tells him he’s ready to move on, and the waiting child has been given the chance to learn patience.

Keep your hands to yourself — not

One of the most commonly repeated phrases you may ever hear from the parent of a young child is, “Keep your hands to yourself.” When children touch each other during play, they are learning to read cues from each other that can’t be taught. Much like the pile of puppies nipping at each other, children do learn from their physical interactions with peers. “Researchers are realizing that roughhousing builds the part of the brain that helps develop academic skills later on,” says Shumaker. There should be ground rules so that nobody is hurt, but most of the time a bit of rough play settles itself and helps young children learn to moderate their behavior.

Sometimes a kid needs to go out and get dirty >>

While educators are pushing more and more curriculum down the pipe toward the early childhood crowd, our children are losing their ability to freely play. The art of play isn’t taught, it has to be learned through hours and hours of non-directed activity. By climbing a tree, jumping over a water puddle, playing hide and seek or simply getting dirty, our children learn self-control, confidence to try new things, trust in their decision-making skills and impulse control.

Try to incorporate more free, non-directed playtime into your week and see what a difference it can make. Sometimes as a parent, we need to change the rules to help our children learn. Which of the renegade rules might you try?

Transitioning to preschool: What you should know
6 Great toys for preschool boys
Best social activities for you and your preschooler

9 hrs ago
by Julia Guerra