What were some of our favorite celebrity moms tweeting about this week? Tori Spelling tweets about her recovery after having emergency surgery from complications from her C-section. Sofia Vergara tweets about her Emmy wardrobe malfunction – and even shows the racy photos! Moms Hilary Duff and Heidi Klum show each other love via Twitter, while Snooki and Jillian Michaels round out our list of top celeb mom tweets. 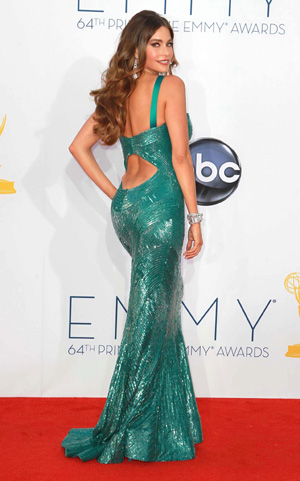 “Look at the belly!!” Sofia Vergara tweeted, with the hashtag “Modern Family,” referring to her pregnant character Gloria Delgado on the hit ABC sitcom. Although Vergara is a mom in real life to a 21-year-old son named Manolo, this is the first time her character has shown off her pregnant belly on the show!

Also on her Twitter feed? Her Emmy Award wardrobe malfunction, of course!

It all started out innocently enough. “Rocking the red carpet with Manolo!” she tweeted. Vergara (pictured right) looked gorgeous in a teal hand-beaded Zuhair Murad gown.

Followed shortly after with the tweet: “Yes!!!! This happend 20 min before we won!!!! Jajajajja. I luv my life!!!!” she wrote, with a link to a photo of her dress split down her backside showing off a peek of her perfectly toned bum. (If my bum looked like that, I may have just left my dress split down the back!)

“20 min Modern Family won!! Dress malfuncion !!! Thank you emergency team!!!” she then tweeted, with a photo of her team fixing the back of her dress.

It sounds like she didn’t let the dress disaster ruin her night!

“This is how the Colombians partyyy at the Emmys!!” she tweeted, with a photo of her partying with a group of tall, dark and handsome men.

After having emergency surgery on September 18 due to complications from her C-section, Tori Spelling was finally released from the hospital.

“I’m back home and thankful for all of your love and support,” Spelling tweeted, with a link to her website with a longer statement that said:

“Hi everyone — I wanted to let you know that I am home from the hospital, on the road to recovery, and overjoyed to be back with my family. I am so thankful for all of your love and support these past couple of weeks. It has meant so much to me.”

The surgery happened not long after she gave birth to her fourth child, Finn. The 39-year-old actress is also mom to 11-month-old Hattie, 4-year-old Stella and 5-year-old Liam. 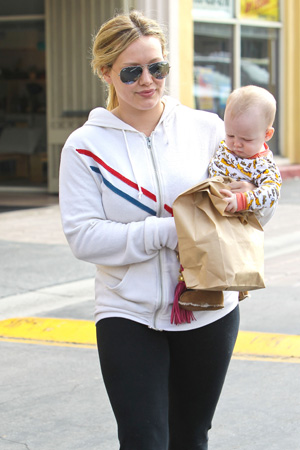 “Guys!! So excited to be a guest judge on @ProjectRunway tomorrow!!! obsessed with the show! Don’t forget to watch!!! 9pm EST!” tweeted Hilary Duff, pictured right with her son Luca.

Heidi Klum returned the Twitter love, writing, “What do you get when you put a crying baby w/ a @ProjectRunway designer? @HilaryDuff is guest judge!,” she said, with a photo of Hilary sitting on the judging panel on the show.

Duff also tweeted this little parenting nugget that many veteran moms already know: “Thank god i spend so much on cute toys for Luca when all he really cares about is the tag or the box it comes in!”

Snooki is back to wearing her sky-high platforms and showed off her new post-baby body on Twitter.

“High heels, high hopes,” she tweeted, with a photo of her looking slim and trim in stiletto heels.

“how did u lose the weight so fast? You look great!” wrote one follower to the Jersey Shore star.

Another nosy follower posed this question to the pint-size mom. “Curious to know why you pump instead of just putting your babe on the boob?”

“Because I’m filming,” she responded, referring to her reality show, Snooki & JWoww.

“My Oct. Redbook cover is out! Can’t say I’m thrilled they printed my “kid confessions” hopefully you’ll get a good laugh!” tweeted The Biggest Loser trainer Jillian Michaels, who admitted to the magazine that she has gained five pounds since becoming a mom to her kids, Lukensia and Phoenix, with her partner Heidi Rhoades.

“I look at my body and go, ‘Five pounds heavier.’ But part of me really likes it.”