What celebrity moms were cover girls this month? Gwyneth Paltrow looked gorgeous on the cover of InStyle magazine and the celeb mom opened up about family time with Apple and Moses — as well as her new diet. Kate Hudson graced Harper’s Bazaar and chatted about her new BFF Gwyneth, while Britney Spears talked paparazzi to Elle. Marie Claire featured the gorgeous Gwen Stefani, while Good Housekeeping chatted with Jamie Lee Curtis. 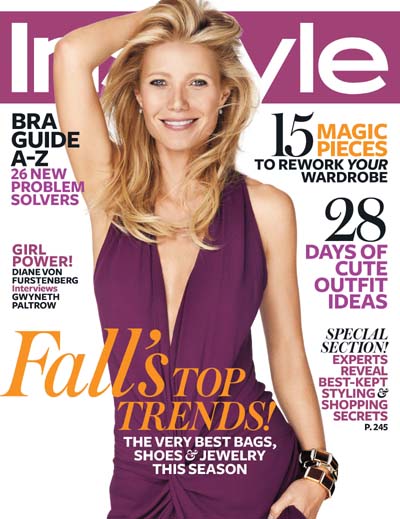 Celebrity mom Gwyneth Paltrow looked gorgeous on the cover of the October 2012 InStyle magazine. The Oscar-winning actress, who is Mom to Apple and Moses, was interviewed by designer Diane Von Furstenberg for the magazine and opened up about her family life — and turning the big 4-0!

“I’m taking stock and really looking at everything,” she said of turning another year older. “I’m trying to accept myself. There’s a Rumi poem, ‘The Guest House,’ about welcoming in all aspects of yourself: The dark, the light, the jealous, the happy. Let them all in. But know that you’re not defined by any single one of them.”

Paltrow revealed to InStyle that her kids have taught her different things about herself. “When Apple was born, she had the hugest blue eyes. I looked into them, and she was looking at me, and I felt like, You are here to teach me everything. After [Moses] was born I had postpartum depression. It was a difficult time, and because of that I believe I have an extra empathy for him, and he for me.”

The actress, who has actually written a cookbook, said that her attitude toward food has shifted as she gets older.

“I was very strict for a while. I was macrobiotic for a couple of years, then I got pregnant and just ate ice cream. What I’ve learned is I want to enjoy my life, and food is a big part of it. I love to cook and feed people. I cook every day. I [indulge] but I don’t like sweets. My indulging is a fresh baguette with cheese and a glass of red wine or French fries and fried zucchini. Or a turkey burger.”

Read more about Paltrow and see her amazing photo shoot in the current issue of InStyle, on newsstands now.

Next up: Kate Hudson talks about Gwyneth Paltrow in Harper’s Bazaar magazine

Photographed for InStyle by Giampaolo Sgura