Shortly after a bilateral mastectomy, the removal of 14 lymph nodes, and six rounds of chemo, mom, wife and breast cancer survivor Ellyn Davidson was ready for a few days of relaxation. Instead, she found a purpose and strength for her own recovery. 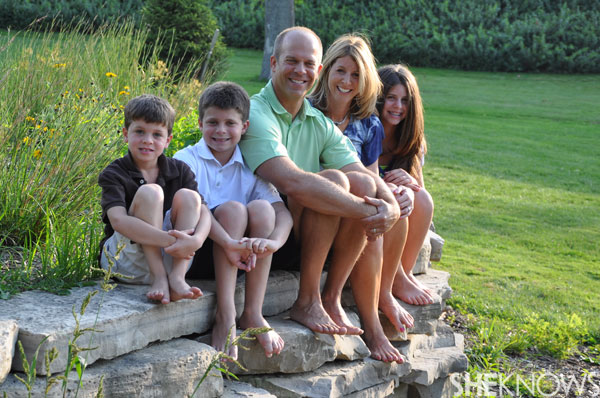 Five years ago in February, my family and I took a vacation at my parents’ home in Scottsdale, Arizona. After a bilateral mastectomy, the removal of 14 lymph nodes, and six rounds of chemo, I was a freshly-minted breast cancer survivor. I was bald, grateful — and exhausted.

Plans for the present

My plan was this: I would lounge on my parents’ patio with a stack of Sudokus. I would watch my husband and kids play at the park. I’d drink as much fresh OJ as my dad could squeeze with his fancy juicer. And I would forget about cancer — at least for a few days — before returning to my home in Detroit and my next round of treatments. These would include breast reconstruction and a hysterectomy/oophorectomy (because, as a carrier of the BRCA gene mutation, I had a 30 percent chance of developing ovarian cancer).

As anyone who’s had cancer knows, life rarely goes according to plan. So what did I actually find myself doing during my weekend of R & R? Having a marathon phone conversation with a woman I’d never met about her own just-diagnosed breast cancer and BRCA gene mutation.

I got off the phone exhilarated and changed. I was no longer just a freshly-minted survivor. Now I was a breast cancer mentor, too.

Since then I’ve walked many (I lost count a while back) newly-diagnosed women through the beginnings of their breast cancer journeys. I’ve been with some of them through the middles and ends, too. It’s something I knew I wanted to do early in my own journey. What I didn’t know was that it would become such an important part of my identity — and my own recovery.

For better and worse, I’m a doer. As soon as I got my diagnosis, I started working my contact list like the advertising executive I am, gathering intel on local physicians and researching my options. In less than 24 hours, I was at my first doctor’s appointment, making a plan of action. I immediately opted for the most aggressive treatment they’d give me.

Similarly, I started recruiting friends and family to walk the Susan Komen 3-Day for the Cure with me while I was too chemo-depleted to walk one mile, much less 60. And when I found out that my breast cancer had resulted from a genetic mutation, I called a group called Facing Our Risk of Cancer Empowered (FORCE) and said, “What can I do?” By the end of the phone call, I’d volunteered to become the Detroit area outreach coordinator. That’s how I came to get that first phone call from Phoebe (not her real name) in Arizona.

Learning as you go

In hindsight, I’m amazed that I was able to help her. I had a mere six months on her in the breast cancer game. Even though I’d done scads of research and been through rites of passage like the mastectomy and getting my head shaved, there were still some things I was naïve about.

But help Phoebe I did. (If you want proof — five years later, she and I are still friends.) I gave her plenty of practical advice. We talked about juggling cancer and “real life.” With my own Cancer Talk with my kids still fresh in my memory, I helped her plan hers. I instructed her to clear her schedule for a week after each chemo treatment and told her how gratifying it was to let friends help with meals and carpooling.

And I just listened as she expressed the same shock and fear that I’d had when I was diagnosed. I think it was that that was most helpful of all for Phoebe. I’d been through it. I got it. As invaluable as all the oncologists, surgeons and genetic counselors are, nothing’s quite as heartening as talking to someone with the same scars and the same middle-of-the-night what ifs.

That’s why it’s so important to me to talk to every woman who calls me. I’ve skipped meetings at work to talk someone through her diagnosis. I spent two hours on the phone recently when I was laid up in bed with an infection. My kids have learned to recognize the signs that I’m on one of those calls. They understand that snack and TV requests will have to wait.

If this makes me sound self-sacrificing, you can forget that notion. Because just as I know it comforted my friends to bring over lasagna after lasagna when I was going through my treatment, I feel amazing every time I mentor a new woman through her first days of breast cancer. I’ve also gotten better at it. I can tell you the difference between triple negative breast cancer and a HER2-positive one. I can give you a dozen good retorts for well-meaning friends who think you shouldn’t have a prophylactic mastectomy if you have the BRCA mutation.

I can also tell you how fabulous it feels to pass that five year anniversary of being cancer-free. 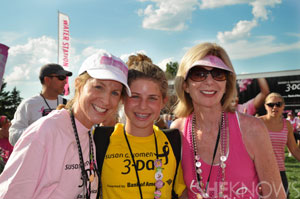 Like walking 60 miles in three days and raising thousands of dollars for breast cancer research; like blogging and doing interviews and giving speeches about breast cancer, being a mentor gives me the solace of action. I know that doing everything I can to fight breast cancer and help those who have it won’t actually prevent me from having a recurrence. But it really does prevent me from worrying about one.

Good enough for me. Just as being a survivor is now an integral — and positive — part of my identity, so, too is being a mentor, an advocate, a doer on behalf of women with breast cancer. I look forward to wearing that role for a long, long time.

14 hrs ago
by Ambrosia V. Brody