Would you turn your nose up at a breastfeeding mom? What if she was famous? Well, someone did to rock star Pink and she was ready to take him down. 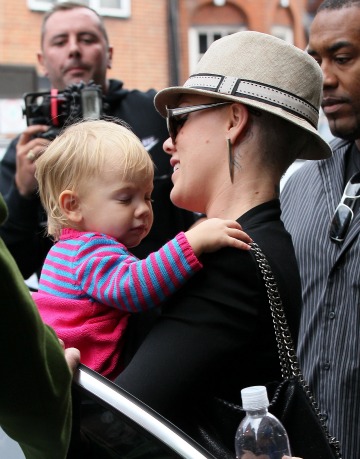 Pink, mom of 15-month-old Willow with her husband Carey Hart, encountered what many breastfeeding moms experience — she was nursing her baby in a restaurant and a man walked by and made disparaging sounds toward the new mom. Even though she was nursing under a cover, the man showed disgust.

Pink responded like we know she would. She told the guy, “You didn’t get enough hugs when you were little,” and when Carey joked that she was starting a fight, she joked right back for him to hold the baby so she could go get him. All kidding aside, breastfeeding in public is a protected right in most states and moms from all walks of life get harassed — from moms being asked to stop nursing, move or even leave places like Target, water parks and even courtrooms.

When asked by British radio host Alan Carr if she considers herself a militant breastfeeder, Pink responded, “I do. I do on purpose,” she said. “I think breastfeeding is healthy and natural and it’s a comfort to my baby.” Breastfeeding, and breastfeeding in public, is thought of as a way to turn the tides of public opinion — the more we see breastfeeding as a normal act that women simply do, it will be less of a big deal.

“Bravo, Pink!” said Chelsea, mom of two. “While I know she was joking around, I’m sure she is in no way a militant breastfeeder. She just wants to nurse her baby without harassment, and to normalize it so the rest of us can nurse in peace.”