It’s Wednesday Hump Day — which means it’s time for our roundup of the cutest pregnant celebs of the week with our Celebrity Bump Day! Singer Shakira just announced she is pregnant — but can you spot her baby bump? Megan Fox is getting bigger by the day, while Olympic volleyball player Kerri Walsh surprised everyone by saying she was pregnant during the Olympics! Amber Rose and Claire Danes round out our list of cute pregnant celebs of the week. 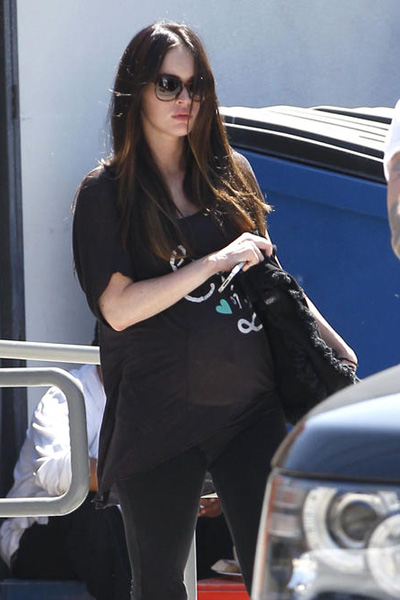 She’s popped! Megan Fox shows off her baby bump in a sheer black top paired with black leggings as she leaves her doctor’s office in Los Angeles on Sunday for a prenatal check-up.

(Yes, apparently one of the perks of being a celebrity is that you get to avoid the dreaded doctor’s office waiting room during the week and get a special appointment on Sundays.)

The 26-year-old Transformers star went to the appointment with her husband, Brian Austin Green, who tried to shield Fox from the paparazzi by using an umbrella.

This will be the first baby for Fox; however Green has a son, 10-year-old Kassius, from a previous relationship.

We wouldn’t be surprised, however, if the couple has several more little foxes. “I want at least two, probably three kids,” she told Cosmopolitan.

Next up: Can you spot Shakira’s baby bump?

4 mins ago
by Alyssa K. Davis