SK: Tell me about Arthur and Erik.

Erika: When I got pregnant with my two oldest boys, I was in a relationship with an extremely abusive man. As soon as I found out I had two boys growing inside of me, I knew I had to go. I had to protect them. I never wanted them to see violence and rage. I left in the dark of early morning and drove three days to get to what felt like a safe place.

I had bleeding episodes from the early stages of my pregnancy. Ultimately, I ended up with an emergency C-section at 28 weeks after I hemorrhaged uncontrollably. I was separated from them completely. Drugged to unconsciousness and kept from them for 12 hours, my early motherhood was drenched in fear and grief.

All the same, as I waited those long hours to see them, I observed myself. I was changed. It was like a key in a lock. I was a mother. I felt it all over me. I was a different animal. It came from within and encircled me completely. My first two children gave me that gift. They made me a mother. They opened the gate for Juice to walk through. I don’t understand and I can’t even let myself think about it for long. It is. That’s all.

A mother’s grief never goes away. It never gets better. We don’t have our children as angels watching over us. The death of a child is the death of self, in many ways. I had to start from scratch, twice: After abuse and then after the deaths of Arthur and Erik. You survive by being two people. One of them never rises from her knees again.

SK: And tell me about Juice.

Erika:  In case of emergency, break glass. I know many grieving mothers who tried to have more children. The all-consuming nature of early motherhood, both in love and work, overrides grief, to a degree. You have to live, even if you want to die. Without Juice, I would have died. 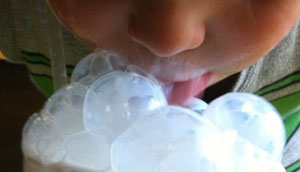 That said, Juice is his own miracle. He’s tuned in, connected. From the time he was born, people have been calling him “old soul,” “indigo child,” “rainbow child” — and now, they can call him Episcopalian. He asked to be baptized because he wanted to take communion so badly. Our priests let him dip his communion wafer in the big cup instead of the little one because he thinks it keeps away bad dreams.

When I told him Father Goeke, in Nebraska, had his own soda fountain he was excited; but he was more excited to hear the Father was holding a private communion service for us. He leaves them speechless wherever he goes.

Juice is also a vegetarian by choice, at 3-1/2. He asked me once if they cut the animal’s bodies and did they cry. Now he says we should leave animals be, pet them and not hurt them. He also says he doesn’t want dead things in his body. In his tiny 3-year-old voice he asks, “Is that vegetarian?” People think that is a big word for 3, but he can also clearly say “Episcopalian.”