Kay Wills Wyma, author of Cleaning House, earned an MBA and worked at the White House, but her greatest challenge may have been her recent quest to rid her Texas home of youth entitlement through a 12-month experiment that got her five kids (ages 5 to 15) cooking, cleaning and helping others, rather than leaning on Mom to do it all.

Inside secrets to banish youth entitlement
Kay Wills Wyma, author of Cleaning House, earned an MBA and worked at the White House, but her greatest challenge may have been her recent quest to rid her Texas home of youth entitlement through a 12-month experiment that got her five kids (ages 5 to 15) cooking, cleaning and helping others, rather than leaning on Mom to do it all. 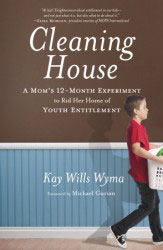 How did your 12-month experiment come about?
Kay Wills Wyma: A youth entitlement storm was brewing in my home and I reached my limit. I had one teen telling me that he thought he should have a Porsche for his first car, a house full of unmade beds, breakfast dishes left on the table and clothes lying on the floor. I sat on our couch lamenting my household and realized I was grooming a brood that looks to me to serve and care for their every need. Since I don’t even believe in that ideology, I decided to stop it right then and there by taking our household responsibilities and plopping them on the plates of our five capable kids.

My kids needed to hear, “I believe in you, so I’m going to make you work.” They took on duties like making beds, buying groceries, doing laundry and disinfecting bathrooms.

What was your family’s reaction when you told them?
Wyma: They whined and told me how mean I was. They compared me to friends, “Henry’s mom cooks for him. I don’t know why I have to cook for our family!” They tried to prove me wrong, “You know, no one will hire a 14-year-old. We called everyone and they said ’18’ or older.” They blamed each other, “It’s not fair. I did the dishes yesterday. She never washes them!” But once they got their hands dirty, so to speak, they actually leaned into every confidence-infusing aspect… without ever alluding to the fact that they actually like pitching in.

In your book, Cleaning House , you write about trying to rid your home of entitlement. What did you find at the end of the experiment — did you see positive changes? 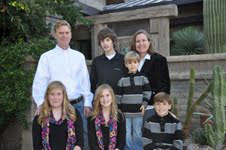 Wyma: The changes in the kids have been amazing, but the greatest change has been in me. I never realized how much I catered to the entitled attitude. And, societal pressure for our kids to look and act a certain way is incredibly heavy on parents. I also never realized that every time I told them, “You can do anything you set your mind to,” yet raced in and did it for them that I was communicating an unspoken, yet loud and clear message that “you can’t do anything,” or “I can do it better and faster,”… exactly the opposite of what I actually believe. I have enjoyed watching the kids do more than they ever thought possible. What were formerly obstacles to these kids have morphed into opportunities.

What do you hope other parents learn from reading Cleaning House?
Wyma: I hope we all embrace that our kids are so much more capable than we think. If we equip rather than enable these kids, the opportunities are endless. Considering their creativity and with their technological savvy, it’s exciting to think about.

Society is in such a strange place. Thirty years ago, we’d never be talking about this stuff. Parents rarely got in the middle of daily activities. Chores were a part of all of our lives. And kids were an integral part of the day-to-day household workings. But today, parents involve themselves in every aspect of our kids’ lives. Maybe it’s busyness and super-competitive academic/athletic efforts that have parents racing in to save, finagle and control so their kid doesn’t hurt for anything and ends up on top. I’m not sure. But our kids aren’t dummies. They know who’s behind their “success” — even when it’s an over-the-top, award-winning school project.

It seems that one of the greatest secrets to a kid’s self-esteem is high expectations. When we expect great things (even in the mundane, because how else can never-ending laundry be described?) then get out of the way, we can watch them soar. And, if needed, cheer them on after they have fallen and watch as they get back up — on their own.

Do you get frustrated that your kids act entitled or expect you to do everything for them? Share your thoughts and stories in Comments below.

Do your kids get good sleep?
Are you a mean mom?
The benefits of emotion coaching