Some kids seem to come out of the womb absolutely fearless. 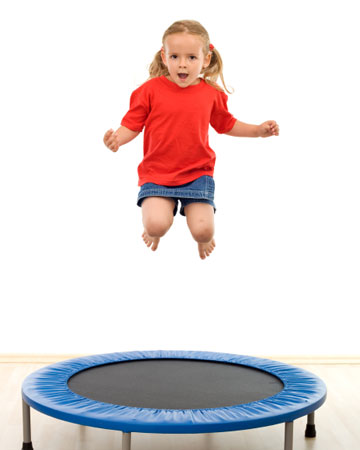 They’re the ones climbing tall structures when they can barely walk and doing jaw-dropping stunts that make parents wince. But don’t worry — you can prevail and keep your kid safe.

You know that child at the playground? The one scaling the jungle gym and hanging from whatever she can reach? Fearless kids like that will make your heart drop a million times over. And when it’s your own, it’s 10 times that.

It can be a good thing

C.S. Stone’s daughter was a little daredevil. “When my daughter was about 4 years old, I looked out the kitchen window and saw her walking on top of the swing set as if it were a balance beam,” says Stone. These days, her daughter is an adult with a career that requires a certain amount of fearlessness. “She is an apprentice jockey and exercise rider who rides babies [young horses] — training them to take a rider and learn to go through the gate at the track. Some children will always be fearless,” says Stone.

It’s not easy being Mom to a daredevil — especially when they exercise their daredevil ways in public. “Since my daughter was 2, she’s had two speeds: Asleep and full speed ahead,” says Laura Cottam Sajbel. “One time that comes to mind, at the park, she climbed to the top of the old-fashioned metal swingset, hung by her knees above the gasping mommies below. She then proceeded to straighten her legs above her head and ‘walk’ down the chains of a swing with her hands, still head-first, until she flipped into the seat of the swing on her rear-end.”

Sajbel also put her daughter in gymnastics. “Over the years, we have learned how much exercise this child (now 12) needs just to keep her even-keeled. We also gave her training in gymnastics at a very young age to help her learn how to do this stuff properly, so she isn’t as likely to get hurt,” says Sajbel.

Tips for parenting a daredevil

Amy Baxter, M.D., a pediatric emergency doctor, is also a mom of two boys who do Parkour. “If I haven’t seen someone permanently maimed or killed by an activity, I let them do it. We started with a netted trampoline, and after four to five years of constant flipping and practice they are comfortable enough with their bodies and landing to be safe,” says Baxter.

In some (but not all!) cases, daredevil behavior can be a sign of Sensory Processing Disorder. Sensory processing disorder is a condition where the body’s sensory signals aren’t properly translated into appropriate responses. If you are concerned, consult your doctor.

Is your defiant child driving you crazy?
Calming foods for hyperactive kids
The difference between bad behavior and ADHD