Children who have asthma are usually prescribed a steroid inhaler to help open up their airways and prevent inflammation. 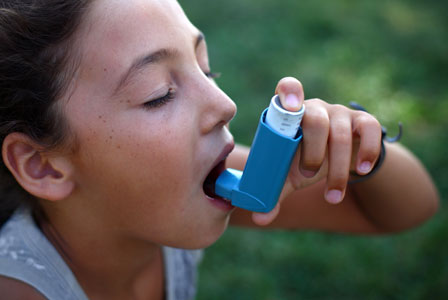 Recent study findings published in the New England Journal of Medicine suggest a relationship between use of these inhaled steroids and slightly shorter stature as adults. Will these findings change the way asthma in children is treated?

Asthma is a life-long disease characterized by shortness of breath, wheezing, coughing and tightness in the chest. Approximately 10 percent of children suffer from asthma and the number of people diagnosed seems to be increasing, according to the Centers for Disease Control. Treatment involves administering inhaled corticosteroids to bring down inflammation, but a recent study found that the use of these medications in childhood affects adult height. What does this mean for children with asthma?

How is asthma treated?

There are two types of medications that are most often used to control asthma. The first is a long-term asthma control medication — usually an inhaled corticosteroid — used to reduce and control the inflammation in the airways. The second is a fast-acting inhaler used during an asthma attack or before physical activity to open the airways quickly. When the long-term medications are properly used and triggers are avoided, asthma can be well controlled and the fast-acting inhaler will not be needed as frequently.

While corticosteroids have long been considered the standard treatment for children with asthma, the long-term effects had not previously been documented.

The Childhood Asthma Management Program was initiated in 1991 with the goal of evaluating two different long-term treatments for asthma and their effects on lung growth in prepubescent children. Approximately 1,000 children from the ages of 5 to 12 years were given an inhaled corticosteroid, an inhaled non-steroid medication or a placebo twice daily over a four- to six-year period. In addition to lung growth, researchers were interested in how responsive the airways were to the medications, the child’s overall growth and their psychological development. A decrease in height was noted after a year to two years on the steroid medications, but researchers were unsure if the height difference would persist into adulthood.

To find out, researchers measured the height of participants when they reached an average age of 24 years to see if there were lasting effects on height of those who used the corticosteroids. On average, this group was half an inch shorter as adults than those who had not been treated with steroids as children. The height difference did appear to continue into adulthood, although it did not become greater.

What does this mean for children being treated with corticosteroid medications? Gary Gibbons, M.D., director of the National Heart, Lung and Blood Institute says that the small impact on height must be weighed against the proven superiority of inhaled steroids over other asthma treatments in children. There may be less of an impact at lower doses, so parents and physicians need to work together when managing asthma care for children. “Parents should ask if their child is taking the appropriate inhaled [steroid] at the appropriate dosage to minimize this risk,” says researcher William Kelly, Pharm.D., of the University of New Mexico.

Asthma is a serious life-long disease, and should be controlled with the proper medications as early as possible in order to secure the best outcomes. By working together with your child’s physician, you can control asthma and help your child thrive.

Kids with diabetes: Tips to help manage the disease
Kids asthma: Tips for an asthma-healthy home
Why are food allergies among children on the rise?