Cloth diapers are becoming more popular for many reasons. Is it because they reduce waste, are easier on your pocketbook, are better for Baby’s skin or because they give your baby’s bum extra cuteness? We poll moms on why they choose to cloth diaper their babies. 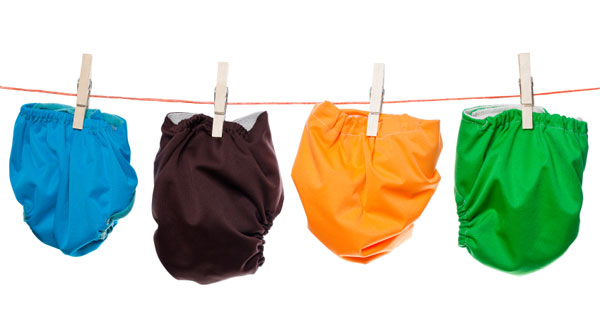 Cloth diapers were a necessity up until the invention of their disposable counterparts in the 1960s. The novelty of a diaper that could be used and then thrown away — without washing — took a firm foothold in the lives of mothers who loved the idea of less housework. Now, disposable diapers are a huge commercial empire and are still the choice of most parents — but cloth diapers are making a huge comeback. Here’s why.

Tip: You don’t have to start a full stash right away. Purchase a diaper every payday and gradually work your way up to full-time cloth.

When we asked moms why they wanted to try cloth diapers, the overwhelming reason mentioned was cost. One package of disposable diapers isn’t expensive, but when you start to think about how it adds up, it can be a little overwhelming. Some families get so strapped that they have to choose between new diapers and food, and some will even have to make the decision to try to dry out and reuse a soiled or wet disposable diaper.

Cloth diapers, on the other hand, can be purchased cheaply and washed and reused over the course of your child’s diapered days. Jessica from Florida also cited cost as a huge reason for her family. “At the time, we were so barely making it that sometimes it was diapers or essentials,” she explained. “We scraped together enough for just enough diapers. I hand washed in the bathtub, and sun dried. It got us through!”

Tip: To cut down on electricity costs, dry your diapers outside in the sun or indoors on a drying rack.

An oft-cited reason for using cloth diapers is that they have less of an impact on the environment. Disposable diapers take an estimated 500 years to decompose, and when you consider the number of diapered children in this country and the number of diapers they go through, the amount of diapers not going anywhere can be staggering.

Shera, mom of three, said, “Cloth diapers are so much [more] convenient for me — and in my opinion, an obligation I have towards being responsible for family’s waste.”

Tip: Some moms report that natural fibers, such as cotton or hemp, are easier on Baby’s bottom than synthetic materials, so if you find that your baby seems sensitive to suede cloth, for example, try another type.

Other moms turned to cloth when disposable diapers turned out to cause diaper rashes or allergic reactions. Kayte from Missouri had such a hard time with disposables that Pampers are listed in her fourth child’s medical charts as an allergen. “When my third baby had had a rash for the first four months that was sometimes bloody I realized the diaper was the issue,” she said.

And still other moms feel better about the ingredients and makeup of cloth diapers over disposables. “I feel like I know what is going up against her bum and being absorbed by her skin,” explained Brittany, mom of one.

Find out why you’ll fall in love with cloth diapers >>

Tip: Many of the top brands will have seconds sales where you can score diapers with minor cosmetic defects for cheap, and also buying used (and then sanitizing) is a very cost-effective way to complete your collection on the cheap.

The fact that modern cloth diapers are so much cuter than they were when Grandma cloth diapered our moms is no lie. Diapers and covers in every color and pattern imaginable are available. Even the cheaper options are super cute, and some moms love to collect the patterns or colors in the style they like.

When asked what her reason for cloth diapering was, Alisha, mom of three, said, “Because they are adorable. Then, once you start, it’s like an addiction… and you can’t stop buying more!”