Everyone’s favorite clownfish and all of his friends are back in theaters on September 14. This time, Nemo’s adventures are even better because the original Disney hit is three dimensional. Don’t miss Finding Nemo 3D! 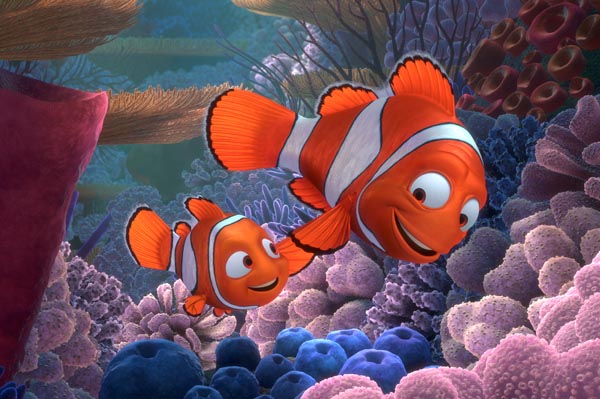 Nine years ago, a cute little fish named Nemo captured our hearts. Nemo’s struggle for independence and his dad’s overprotective nature resulted in the sweet clownfish with the cutest voice ever being captured by a diver. (P. Sherman, 42 Wallaby Way, Sydney… P. Sherman, 42 Wallaby Way, Sydney… I’m not the only one who can repeat that in my sleep, right?)

Finding Nemo 3D was a whole new experience for me. It had been years — nine, to be exact — since I’d watched the entire movie from start to finish. And although my kids have watched Finding Nemo on DVD many, many times, I haven’t ever sat down to view the entire movie again.

So, that alone made seeing Finding Nemo 3D awesome! I had forgotten so many parts that it was almost like seeing half of the movie for the first time. But even better was the incredible 3D quality. It truly brought the film to life.

When I had the opportunity to screen it last month, I learned some interesting new facts. Finding Nemo was actually originally shot in 3D, but the technology didn’t yet exist to show it in theaters that way. John Lasseter, chief creative officer for Walt Disney and Pixar Animation Studios and the film‘s executive producer, noted that what you’ll see in Finding Nemo 3D is what you were meant to see all along!

“At last, with today‘s technological advances, this spectacular underwater world can be seen as it was intended — showcasing its eye-popping detail and breathtaking colors to both theatrical and in-home audiences and creating a truly immersive experience,” he said.

More than just a kids’ movie

When Finding Nemo was originally released in 2003, I wasn’t a mom yet. I certainly saw the movie and thought it was a great one, but I didn’t appreciate the heartstring tugs quite as much as I do now! The never-ending commitment a parent has to her child is something that I understand as a mom, so for the first time, I really got Marlin’s refusal to ever give up on finding Nemo.

And like all Disney•Pixar films, Finding Nemo 3D is full of fantastic humor that adults love but that is appropriate for kids too. Plus, don’t forget the wisdom. “Just keep swimming, just keep swimming… ” are words to live by!

It’s a great film for kids of all ages. The only potential fright factor is the sharks, so if your youngsters are particularly sensitive, make sure to view the regular Finding Nemo at home first so you can decide if they’ll be OK with it.

As a bonus, there’s a fun short before Finding Nemo 3D and it’s the best so far. Watch this clip of Partysaurus Rex to get an idea of the fun to come!