What were some of our favorite celebrity moms tweeting about this week? Vanessa Lachey and Kristin Cavallari are baby name twinkies! They both named their sons Camden — but is Kristin annoyed about it? Rihanna offers to babysit Snooki’s baby, and Jessica Simpson tweets about her post-baby bod reveal. 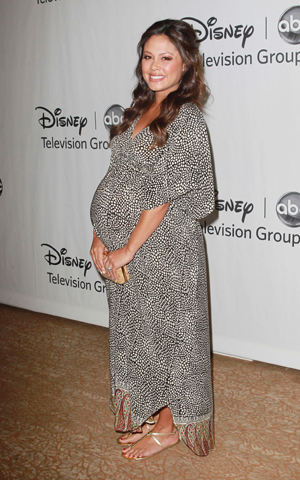 “Apparently Camden is a popular name!” Cavallari tweeted, shortly after the baby name was announced.

She quickly followed that tweet up with another, to clarify what she meant.

“By the way that wasn’t a bit**y tweet at all…I obviously love the name and I’m glad other people do too,” she wrote.

One of Cavallari’s followers wrote, “it should be a bit**y tweet. They jocked your baby’s name!! They should of been more original.”

No word from Vanessa on the baby name coincidence, as her last tweet was the day before her baby arrived. “@NickSLachey and I just made 4 different casseroles in bulk to freeze. Now, when the munchkin arrives, I’ve got some grub!” she wrote.

Cavallari is dropping the whole matter, writing, “Walking uphill on the treadmill to work out this booooty #byebyebabyweight”

It sounds like Snooki has a high-profile babysitter for baby Lorenzo! “Rihanna’s We Found Love will NEVER get old to me!! My song for life,” tweeted Snooki.

“thank u! Lemme know if u need a sitter,” Rihanna quickly wrote back.

Who knew Rihanna was so motherly?

“Ugh just looking at Lorenzo and I start crying happy tears! I’ve never been so happy in my life!!!” Snooki later wrote about her baby boy.

“I know I can’t wait to hit the gym hardcore! Ugh #postbaby” she wrote back. (For what it’s worth, we think you look great, Snooki!) 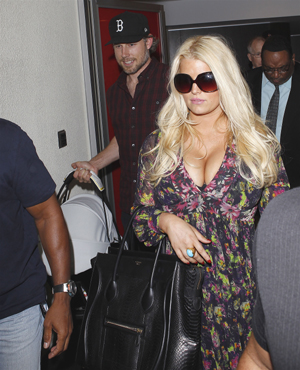 Jessica Simpson is facing some serious backlash from some who thought it was “inappropriate” for her to show a photo of baby Maxwell in a yellow bikini during her appearance on Katie, however the new mom isn’t letting the controversy get her down.

Simpson went on the show to talk about her weight loss and how she is handling motherhood to her 4-month-old daughter. “On my way to @katiecouric ‘s show! I’m her very first guest – Wish me luck!! #WeightWatchers,” she tweeted.

“Just finished the @KatieCouric show. So much fun! Here’s my look-Roland Mouret,” she wrote, with a link to a photo of her showing off her slim waist in a black dress.

We know Simpson has been eating healthy with Weight Watchers, but it sounds like she has also been exercising the baby weight off as well. “24 is my new treadmill show!! How have I not watched this show before now?!?! Jack Bauer is my hero!” she wrote.

“Marko and I are overjoyed to welcome Sienna into our family and Valentina is looking forward to becoming a big sister!” she tweeted.

Early this month, Lima wrote that she and her husband were planning on having a pregnancy surprise. “For the rumors about the gender of my and Markos baby I would like to make clear that both me and my husband don’t know,” she wrote.

While awaiting the arrival of her baby, Adriana was busy looking for her missing dog, Ivy.

“Please help my dog went missing in Miami….,” she tweeted. “Please help me, Marko and Valentina find our Dear Ivy”

“I am devastated that Ivy still missing. Don’t know what else to do. I miss my little buddy,” she wrote.

Congrats on baby Sienna (and we hope you find Ivy)!