You know Alison Sweeney as the host for NBC’s hit reality series The Biggest Loser, host and executive producer of Hollywood Girls Night, and the award-winning Sami Brady on NBC’s hit daytime drama Days of our Lives. In addition to all her celebrity talents, she’s also a wife and mom. And for the month of September, she’s a SheKnows Mommaloguer.

Alison Sweeney is now a Mommaloguer 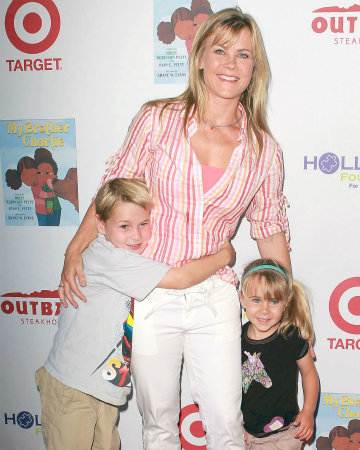 For the month of September, Alison Sweeney is SheKnows’ guest vlogger and she’ll be sharing her thoughts about life and motherhood with our regular Mommaloguers. You’ll love learning more about the TV host, actress, producer, director and author as she talks about balancing her life as a mother, wife and philanthropist. Sweeney will share her thoughts about health and wellness, parenting and family, and much more.

Sweeney, who is Mom to 7-year-old son Ben and 3-year-old daughter Megan, follows other celebrity moms that have raised their voices on the Mommalogues including Alanis Morissette, Candace Cameron Bure, Cindy Crawford and Mayim Bialik. Sweeney resides in Los Angeles with her husband Dave, who is a California Highway Patrol officer, and her two children.

Sweeney, who just completed her 10th season as host of The Biggest Loser, has been so inspired by the show’s contestants that she recently completed the 2012 Los Angeles Marathon and is now ready to take on the 2012 Nautica Malibu Triathlon later this month. She’s also an accomplished author. Her most recent book, The Mommy Diet, was released in 2011 and will be out in paperback in December 2012. The book focuses on ways to get both physically and mentally healthy after having a baby in a positive, attainable way.

Growing up on TV

If you are a Days of Our Lives fan, you know that Sweeney first joined the cast as Sami Brady at age 16 — nearly 20 years ago. Her character has tackled tough storylines from bulimia and date rape to teen pregnancy and capital punishment. Sweeney has garnered numerous awards for her work on Days of Our Lives and has also added director to her long list of credits in recent years.

Sweeney’s charity work includes her role as an ambassador for Stand Up To Cancer, a member of the Entertainment Council for Feeding America and a co-host for the annual MDA Telethon. Follow her on Twitter at @Ali_Sweeney and check out her website at alisonsweeney.com.

In addition to the Mommalogues‘ celebrity vloggers, the online conversation includes eight regular well-known and up-and-coming mom bloggers who discuss topics such as how real moms juggle careers, marriage, hobbies, family health and wellness and the chaos of modern parenthood.

Is it OK to Bring Kids to the Office? Here’s What People Really Think