Your child doesn’t have to be a football player or cheerleader to take part under the Friday night lights. There are so many ways to get involved, support the school and improve your community.

Related story Shawn Johnson’s Son Jett is a Mini Football Star in the Making — Just Like His Dad! 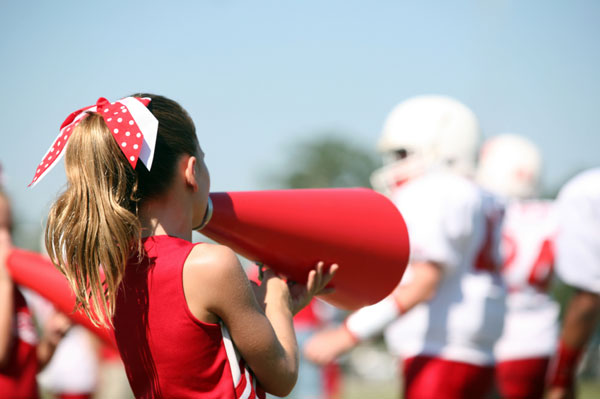 As Frank, a father of four boys, was flying across the country on a Friday evening one fall, he was astonished by the overwhelming number of Friday night footbal lights shining from the ground below. In nearly every town of every state, communities had come together to enjoy one of America’s favorite pastimes: High school football.

“The best thing about Friday night football,” says one varsity coach, “is the way it can unite a community. Every high school kid can be involved in one way or another… whether he plays football, or not.”

What parents should know about college athletic scholarships >>

Football games would be dull without the band! Whether it’s performing on the field at half-time or in the stands during the game, the band adds those musical memories that last a lifetime.
How to create a musical life for your child >>

Anyone who’s ever strapped on a helmet to play high school football knows that it’s a one-of-a-kind experience. “My coach told me to drink in every minute — that graduation would come and it’d be over before I knew it — and he was right,” says Tom. “I would do anything to put on that uniform and play one more down.”

Players and fans alike appreciate the efforts put forth by the cheerleaders — who are athletes themselves — to instill school spirit and keep the energy level high. “My daughter is a cheerleader, so I attend a lot of sporting events,” says Charlene. “Friday nights are the best — I don’t care much for football, but I love watching the kids cheer and do stunts on the sidelines.”

“Dare Me” by Megan Abbott: a disturbing look at high school cheerleading >>

While the football team, cheer squad and band provide ample opportunities for your child to be involved in a Friday night football game, they’re not the only options he or she has. These students found their own ways to take part in one of America’s favorite traditions.

When girls take sports too far
The fall of youth sports
Who’s coaching your children?