Actress-author Tori Spelling welcomed a son on Thursday. This is the fourth baby for the 39-year-old Craft Wars host and her husband, actor Dean McDermott. 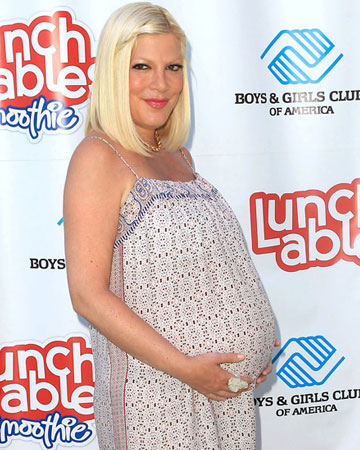 Tori Spelling gave birth to a baby boy, her fourth child, on Thursday. The Beverly Hills, 90210 alum announced her son’s birth at ToriSpelling.com where she shared the news in a post titled “It’s a Boy!!” She also tweeted the news to fans.

“We are so excited to announce the birth of the newest member of the McDermott family!” wrote Spelling.

Finn Davey McDermott was born at 5:39 p.m. and weighed in at 6 pounds, 6 ounces. He’s 20 inches long. Spelling and husband Dean McDermott are also parents to 5-year-old Liam, 4-year-old Stella and 10-month-old Hattie. McDermott, 45, is also dad to 13-year-old Jack — his son from his first marriage.

McDermott and Spelling chose to wait until birth to discover the sex of their newest baby.

Spelling announced that she was pregnant back in March — a mere five months after giving birth to Hattie. She said that the unplanned pregnancy was a result of she and her husband’s unsatiable lust.

Spelling’s latest book CelebraTORI was released on April 3 and is filled with themed crafts for parties. She’s also host and executive producer of Craft Wars on TLC, a crafting competition show.

The husband and wife duo met while filming a Lifetime TV movie, Mind Over Murder. They were married less than a year later on May 7, 2006 in Fiji.

Head over to allParenting.com, where Tori Spelling is featured as one of our celebrity writers along with other celeb moms like Elizabeth Banks, Alicia Silverstone and Kendra Wilkinson Baskett.