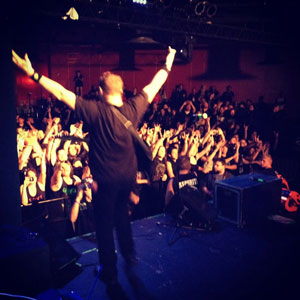 SK: Do your children understand that their dad is in a metal band?

Kelly: Grey is 6 years old, WinterRose is 2. Grey does understand that his daddy is in a band, but I don’t think he understands that people actually listen to his band and come out to concerts to see him play.

SK: What does he think about it?

Kelly: He thinks that when the tour van comes, Daddy is going to be gone a long time. Kids have a very narrow and innocent view of the world, and that is his view.

SK: Have either of them been to a show?

Kelly: Yes. The have both been to shows. Not shocking that metal shows aren’t the greatest environment for kids. Luckily, most people in other bands are very respectful of us and them when they are around. Despite how great everyone can be, I tend to get stressed out. Last time I took them to a show they watched the band play for about five minutes, got bored and wanted to go backstage.

SK: What influence have you and/or your kids had on the band?

Kelly: I am not sure that I have had any influence on the band, but Ben did write a song called “Greyson,” after our son. It’s an instrumental interlude and is very slow compared to the rest of the album it is on. Fans seem to love it.

SK: Have there been any unique issues with fans regarding you or your kiddos?

Kelly: We have had a few people tell us that they have named their child Greyson, either after our son, or after the song. It’s kind of a trip, but is also flattering. Young metal parents, especially young metal fathers, tend to look up to Ben. We both think that is pretty cool.

SK: Do you ever worry about a fan becoming crazed and stalking you all?

SK: What advice would you give to a mom whose partner is a hopeful in a band?

Kelly: You have to be supportive. You don’t want to be the person who held your husband or boyfriend back. Ben has gotten to live his childhood dream. He’s gotten to play at festivals in front of tens of thousands of people. All Shall Perish was the first American metal band to play in Siberia! Can you imagine if I had tried to squash his dream and his friends went on to have that experience without him?

Kelly is a professional photographer with expertise in maternity and birth photography — check out her website here: Photography by Kelly Marie

All Shall Perish on the web: www.allshallperish.com

On the flip side, don’t become a doormat. I’ve seen guys let being a “rock star” go to their head. To me, Ben isn’t a rock star. He is the father of my children, the guy I met in high school, the silly dude who loves Star Wars and silly cartoons. Playing guitar doesn’t change any of that. It doesn’t give you license to disrespect the woman in your life, or your children.

Lastly, you need be supportive of each other. You need to learn to communicate. It took many tours, and many tears for us to learn this lesson. I needed to learn to express my needs (needing him to check in via text more often)  and I had to learn what his needs were (for me to understand how very busy he can be on the road).

Tandem nursing: Breastfeeding for two
Home birth without a midwife
This mom parents with her feet