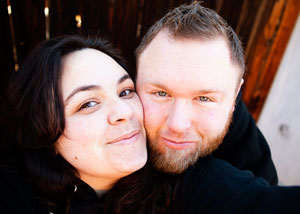 SK: How did you meet Ben?

Kelly: Ben and I met in high school. He went to one of the schools in our small town, and I went to the other. I had met a lot of people from his school through our local youth center, which also put on shows at a building downtown. So we had a lot of mutual friends, and what we all had in common was being “misfits,” “punks,” and being into music that was less than mainstream.

SK: Was it love at first sight or did it take a while to develop?

Kelly: We met when we were 17, but didn’t start dating until we were 21. So definitely not love at first sight! We were acquaintances, who became friends, and friendship evolved into love.

Kelly: It’s hard to really pinpoint a “first date” since we had been friends for so long. Our first kiss was at midnight, January 1, 2000. We were at a party at a friend’s house, we were both single, but we were still just friends. The day we started “officially dating,” his band had two shows, so I went to two of his shows that day.

SK: Was Ben in All Shall Perish before you got together or after?

Kelly: Ben was not in All Shall Perish when we started dating — he was in a band called Antagony. They did a tour with two other local bands in 2002. All Shall Perish was kind of born from that tour, and had members from all three of those bands. They signed with Nuclear Blast in 2005, who re-released their self-produced album Hate. Malice. Revenge. Since then they have written and recorded three more albums.

SK: What bands have they toured with?

Kelly: They have done so many tours at this point that it is really hard for me to remember! Some that stand out to me are Bleeding Through, Caliban and Suicide Silence. They’ve also toured with Danzig, were on the Mayhem Fest tour with Megadeth, and are about to do a tour with Hatebreed. 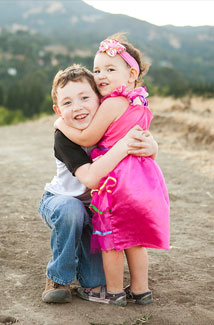 SK: What was it like before Grey was born? Did you tour with the band?

Kelly: I did go on a couple of tours before Grey was born. I did also go on a European tour after he was born. It was a really fun and exciting time in our lives. The band’s popularity was growing and each tour was getting bigger and bigger. The European tour was their first time playing in Europe, so it was really fun getting to experience that with them.

SK: What is it like being backstage at a metal show?

Kelly: Honestly, it can be pretty boring! Of course, there are days that are wild and crazy. There are always at least a few great stories from the road. For the most part, there is a lot of waiting around.