Kelly isn’t just an awesome mom to two beautiful kids — she also co-parents with her husband, Ben Orum of the California-based metal band All Shall Perish. 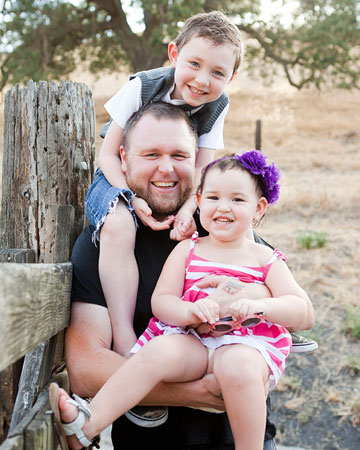 We chatted with her to find out what unique challenges a closely-knit rock star family has to face.

Kelly is like many moms — she has two happy and healthy children and enjoys a wide variety of activities in her California home. One aspect of their lives is a bit different from most of us, however. Her husband has a unique job — he’s a guitarist for the deathcore metal band, All Shall Perish. How do their lives differ from the rest of us, and how do they make time for family.

SK: Where were you born and raised?

Kelly: I was born in the Bay Area and raised in a little town called Danville, which is an affluent suburb about 35 minutes east of San Francisco. I mention “affluent” because my family was not. I wouldn’t say we were poor, but we weren’t crazy wealthy like many of the people around us, and I feel like this really shaped who I was as a teenager. Of course, looking back I can see how much we benefited from being in a town that was safe, and had excellent schools. Staying in Danville, despite the cost of living, is something my mom really fought for, and I thank her for that.

SK: What is one of your favorite childhood memories?

Kelly: My maternal grandmother only lived about five minutes away from us, so we spent a lot of time at her house. My cousin lived with her. Summers were filled with playing in the backyard; swimming, gardening, pushing each other around on dollies. It was a very happy time and place.

SK: What sort of music did you like as a youngster?

Kelly: I liked a lot of typical kid’s stuff, like New Kids on the Block. However, I was also really into Cyndi Lauper. I thought she was the coolest, and loved her style. My love of Cyndi was kind of the first indication that I was going to be on the more alternative side. I was 8 years old when the Guns N’ Roses album Appetite for Destruction came out. I was really into all of the late ’80s hair metal like Guns N’ Roses, Skid Row and Motley Crue.

SK: And as a teenager?

Kelly: In my early teens I was really into grunge. I had a boyfriend who was in an industrial band, so we listened to a lot of Skinny Puppy, Babyland, Pigface. A lot of obscure stuff. Around 15 is when I started going to shows a lot in Berkeley, California. We went because that was where our friends were. Thinking back, a lot of the bands were awful, but they were our friends so it didn’t matter.