Trevor MacDonald is like any other parent — he loves his child and wants what is best for him. 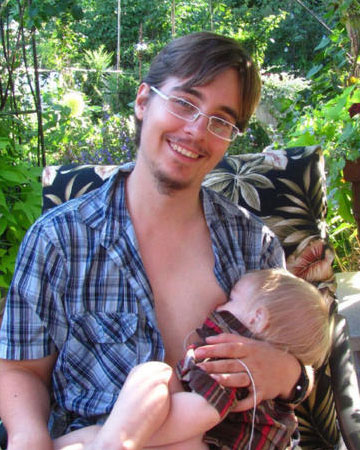 What makes him incredibly unique is that he is a transgender man and breastfeeds his baby. He is now hoping to become a La Leche League leader — read on to learn more about his story.

With the help of an at-breast supplemental nursing system, Trevor MacDonald, a transgender man who kept his female reproductive system, has been able to breastfeed his baby. He owes much of his success to a local La Leche League group, who rallied around him and gave him the support that he needed to breastfeed. Now, he’s striving to become a leader himself so he can give support to other parents who may need it.

We were able to catch up with Trevor to find out more about his singular breastfeeding success story. “I was born female, but transitioned to male by taking testosterone and having male chest-contouring surgery. This is somewhat different from either a reduction surgery or a mastectomy, as the surgical goal is to create a male-appearing chest,” he explained.

The chest-contouring surgery greatly reduced his breast tissue and at first, he and his partner assumed that they would formula feed. “However, in our first trimester, a friend of mine who is a La Leche League leader loaned me a book called Defining Your Own Success: Breastfeeding After Reduction Surgery by Diana West,” he said. “I read the book and learned that it might still be possible for me to make some milk. Even if I didn’t make any milk at all, I could give my child the benefits of a breastfeeding relationship by using an at-breast supplementation system.”

With this in mind, he turned to his local chapter of La Leche League and was welcomed with open arms. “I found amazing support and knowledge by going to La Leche League meetings,” he shared.

On becoming a leader

A local leader encouraged Trevor to apply to be a leader as there was a need for more volunteers in the area. His application was initially turned down. “La Leche League cited a policy that men cannot become leaders,” Trevor reported. “In order to be a leader, you must ‘mother through breastfeeding.’”

Currently, however, La Leche League is considering his request. “La Leche League International has announced that it will revisit its policies regarding transgender leaders,” he told us. “I’m very excited about this!”

Trevor feels he can be a boon to breastfeeders by providing a unique type of support. “I know how difficult breastfeeding can be — I learned how to latch my baby on despite having very little chest tissue and learned to juggle the at-breast supplementation system,” he explained. “With La Leche League’s leader training, I hope that I would be able to assist parents experiencing these kinds of challenges as well as many more.”

To learn more about Trevor’s story, visit his blog, Milk Junkies. He also has a Facebook support group called Birthing and Breastfeeding Transmen and Allies. This is a space where like-minded individuals are sharing their experiences. It will soon be linked to breastfeeding support meetings with access via Skype so that LGBT breastfeeding parents around the world can connect with one another.

And what would Trevor tell someone going through a similar situation? He said, “I would tell him to go to La Leche League meetings! Nothing is better than actually seeing breastfeeding in action and having fantastic peer support.”