Along with sex ed, why not learn about breastfeeding in school? Students in the Liverpool area in England are doing just that. What do you think about it? Read on and decide for yourself.

Related story Ashley Graham Opens Up About Rejecting the ‘Shame Culture’ Around How We Feed Our Babies
Is it totally inappropriate or a terrific idea? 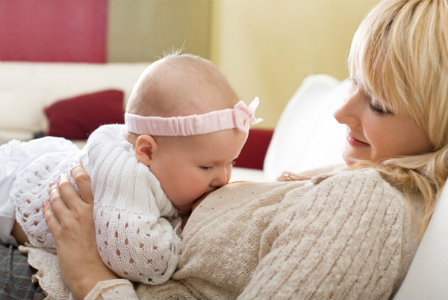 Puppet babies and knitted breasts are helping teenage students in the U.K. learn about breastfeeding. And even though it’s hailed as a way to expose youth to the natural act of nursing (many of whom have never seen a mother nursing her baby before), some are finding issue with the practice.

Norman Wells, from the Family Education Trust, felt that the lessons were inappropriate — the age of consent is 16 and kids this age have no need to learn how to breastfeed. “’The benefits of breastfeeding can be far more appropriately and effectively communicated to expectant mothers by GPs and midwives at antenatal appointments in the weeks and months immediately prior to the birth of a baby,” he told The Daily Mail.

“Any girl who has to be taught how to breastfeed or how to be a good mother should never have children,” shared one commenter on The Daily Mail’s article. Glenn from the U.K. agreed. “These idiots should be locked up so they cannot do our children any more harm,” he wrote. “It’s idiots like these that only make underage pregnancy worse.”

Read why this mom loves breastfeeding her preschooler >>

Other parents felt that not only is this an awesome idea, but that it should be taught just as sex education is — a course many adolescents take both here and abroad. “I would venture to say it’s not making them want to have babies any more than sex ed is making them want to have sex,” explained Melissa from Texas. “To me, it’s just giving them more knowledge about the subject.”

“Throw it in with sex ed,” Kelly, mother of two, said. “I think letting teen girls know what their boobs are for (other than for their male counterparts to oogle) is a great thing.”

Jessica from Florida completely agreed. “We hand out detailed pictures of genitals, teach about menstruation, safe sex, STDs, pregnancy, child development and more — but how do we forget breastfeeding?” she asked. “If more girls are taught and shown that it’s normal, less young mothers, or mothers in general, would think it’s ‘weird’ to do so.“

Does breastfeeding help with weight loss? >>

Maybe use a different method

And still other parents felt that it was a good idea but another method should be considered instead of the puppet babies and fake breasts. “I think it is kinda odd,” noted Talei from New Zealand. “Why not just invite some nursing moms to talk to them and feed their babies in front of them?”

This unique program is in its beginning stages in the U.K., but plans are in place to roll it out further across the country.

How do you feel about a similar program being run in the U.S.? Would you want your daughter to learn about breastfeeding in school? Leave a comment below and tell us how you feel about the topic.

Celebrate National Breastfeeding Month in style
Breastfeeding photos: Moms with their babies
Why you should breastfeed your toddler

13 hrs ago
by Cristina Velocci