SK: What is it like to breastfeed in public in Germany? 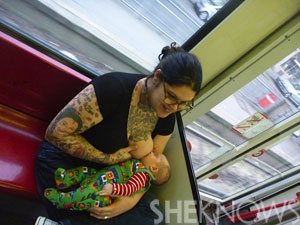 Mariana: It’s pretty OK. I can honestly say that I’ve nursed pretty much everywhere and only had problems maybe two or three times, which is a good track record for someone who’s been publicly breastfeeding daily for the past six years! And even when something happened, it was never anything that a good “screw you” wouldn’t fix immediately.

I was once told by a male employee at a department store that I should go nurse at their special nursing corner. Mattis got pretty angry and said he had no legal right to ask me that. I just asked the guy if his suggestion was due to store policy or concern for my comfort, to which he replied store policy. So I said “no, thank you, I’ll just stay right here.” Meanwhile, all the female employees smiled [and] cooed at me and my little baby.

But the vast majority of times I got approached by strangers when publicly nursing was by amateur photographers (mostly pensioners that had taken photography as a hobby after retirement, funnily enough — there are hoards of those here!) asking for a picture.

SK: What advice would you give a mother, currently breastfeeding a baby, who becomes pregnant?

Mariana: Nursing during a pregnancy can be really hard, uncomfortable, and exhausting, but it’s for a limited amount of time and it does pay off. If you want to keep nursing through the pregnancy and then tandem after the new baby is born, find some support. There are many specific issues you might run into, and many times you’ll need a truly understanding listener, and there’s nothing like knowing other women who have been there and done that when those times come.

I didn’t know anyone who’d done it in real life, but I did online, and I got heaps of support that way, which I could not have had otherwise. Also, consider looking up a La Leche League group or leader from the get-go, and maybe pick up a copy of Adventures in Tandem Nursing, which was written by a tandem nursing mom and is full of stories of other women who’ve done it and share their hard times and practical tips on how to make things easier.

SK: What was the biggest challenge about tandem nursing?

Mariana: The biggest challenge was how much patience it required from my part. Sometimes I’d be just done nursing one child and dying to just get up and go do something else, and then the other one would come to nurse and I’d just go back to square one. There was one notorious day, still in the earlier stages when, I kid you not, I spent the entire day sitting on my big nursing recliner taking turns nursing children, getting up only to go to the bathroom. That was pretty exhausting!

SK: And what was the biggest reward?

Mariana: You know that awesome feeling you get when you hold your baby at your breast, calm and content, and you bask in the knowledge that for now you can give that little person all they need? Imagine having that times two! Now add to that getting to watch these two new siblings getting to know each other, playing, petting each other, and bonding while you lovingly feed and hold them. Love abounds!

Dear White Parents: Are You Still Talking to Your Kids About Race?

10 hrs ago
by Amanda Hambrick Ashcraft