SK: Did you and Mattis come into your relationship and marriage with similar parenting philosophies? 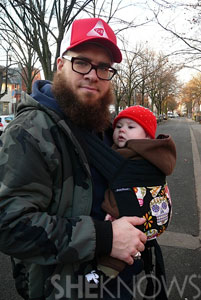 Mariana: Luckily, yes. What little we disagreed on got worked out before our first baby was born. We started talking about having children pretty early on as we both very much wanted to be parents at some point in the future, and Velma was very (and I mean very!) planned.

So between just thinking about the future, the time it took us to decide when was the right time to go for it, trying to conceive, and the pregnancy itself, we had loads to time to talk, brainstorm, and work our very few differences out. But we always were, and still are, very much on the same page.

SK: Did you always plan to breastfeed your children?

Mariana: Yes, always. To me, whenever I thought of mother and baby bonding it was the image of a mother nursing her little baby that came to mind. And I guess I always knew it was the best choice as far as health is concerned. When I was 18 I had a breast reduction, and even then my biggest concern was whether or not it’d affect my ability to nurse my future children. Had the surgeon said, “yes, it’ll get in the way of breastfeeding,” I would have definitely not done it.

SK: How did it go with Velma?

Mariana: At first, not so good, which was hugely disappointing. My nipples were incredibly swollen and her mouth so, so little — she basically only latched on to the nipples themselves, not the areolas and, because of that, I got terribly cracked nipples. It was incredibly painful to nurse! So much so, I’d cry during the evening feedings, when my nipples would be extra sore, and sometimes they bled so much, she’d have to vomit up my blood after a feeding.

It took me a whole two months until breastfeeding became comfortable, by which time my nipples had changed shape by elongating and fully healed. I’m glad I plowed through it! Honestly, it sucked, but I didn’t care — all that mattered to me was to keep going because I knew I could make it work.

And, luckily, I had the support I needed to do so, between my husband, who was amazing — he held my hand, cheered me on and made sure I never ran out of Lansinoh, my midwife (who had also experienced badly cracked nipples when she breastfed her own baby) and my fabulous online mama friends, who were an invaluable source of support and information, even if from afar.

SK: And when you got pregnant with Viggo, how old was Velma?

Mariana: I found out I was pregnant again nine days before my 30th birthday and 15 before Velma’s third. Viggo was very much a surprise. The best surprise of my life, no doubt, but a shocking one none the less. She was just over 3-1/2 when he was born. I was very much terrified I wouldn’t be able to manage pregnancy with a toddler, and then a toddler and an infant, and it was really tough for a while, but we all made it out alive!

SK: Did you know that you’d continue to breastfeed throughout your pregnancy, or did it just happen?

Mariana: Oh, no, it was very much a deliberate decision on my part, mostly because I feared that if I weaned her during the pregnancy my boobs would become yet another something for her to feel she had lost over the new baby and be jealous about. I pictured tandem nursing as a possible bonding experience for all three of us, and that kept me going through the difficulties of nursing during a pregnancy. And in the end, I even nursed her during labor!

SK: When was the first time you nursed both of your children at the same time?

Mariana: We kinda tried it during our first bedtime as a family of four the day he was born (he was born at home) but that just didn’t happen. I basically nursed Velma whilst also holding him. It wasn’t until the next day, in the morning, that we had our first real tandem experience, while I sat reclined in bed. It was amazing, and cozy, and clumsy, and slightly uncomfortable all at once! Finding a good position definitely took a bit of practice.

SK: What are the benefits, in your experience, of tandem nursing?

Mariana: First, there are all the obvious health benefits for both nurslings. Then, there’s no engorgement! That was pretty great! But all in all, I’d say the best part of tandem nursing for me/us was what it did for our relationship. It was a safe haven on bonding at a time when I was often exhausted and stressed. It was the only time I felt I was filling both children’s needs at the same time and didn’t have to do a “triage” in my head to decide who to tend to first, and it was very reassuring for the children. They shared so many tender moments at my breasts! It was also a very practical way of getting them both to fall asleep at the same time, for instance.

SK: Have you had any negative comments about tandem nursing?

Mariana: Not at all, though I know the vast majority of the people I know in real life just didn’t get why I was doing it. I guess at this point, people know not to mess with me and my boobies! Strangers never approached me either — they mostly just stared in disbelief, if anything. What I also had happen, when tandem nursing around new moms who were having a hard time with nursing in public (struggling with wiggly babies and nursing covers) was that they’d suddenly get pretty brazen. It was great, and I would feel like I was supporting them even if from afar and without words.

Amy Schumer Can Find Humor Even In IVF: Her Best Posts While Undergoing Fertility Treatment