Mariana breastfed her daughter through her second pregnancy, and then she nursed them both after her son was born. Read on to learn why she is such an amazing, hands-on mother in this and many more ways. 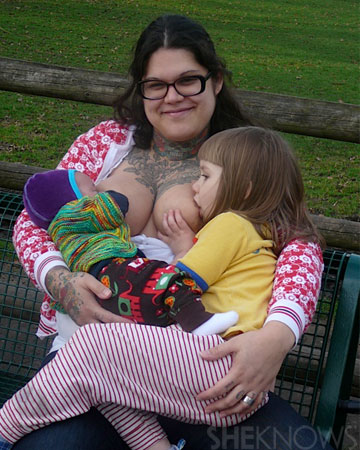 Relocating across the globe to be with her true love, Mariana has led an inspiring life of hands-on parenting with her husband and two children. We were able to catch up with her to find out why tandem nursing worked for their family and how she found support to do so.

SK: Mariana, can you tell me about where you were born, where you grew up?

Mariana: I was born and raised in Rio de Janeiro, Brazil. It’s a beautiful place! I basically grew up in the ocean and, whenever I see pictures of my nephews or some of my friend’s children at the beach, I get a little sad my babies don’t really know what that’s like. On the other hand, it’s not a very safe city, and I’m grateful my kids don’t have to grow up being scared. But I have to admit, I still miss it, especially when I see pretty pictures of it.

SK: What was your family like? Attachment parenting-esque, or something else?

Mariana: Oh, no… my family was pretty far from attachment parenting, sadly. I think we could have all benefited from it. I’m a second marriage child and have three half-sisters who are six, seven, and eight years older than I am — the two older ones being from my mom’s first marriage and the younger one from my dad’s.

My sisters from my mom’s side and I always lived together, but the one from my dad’s lived in another state with her mom and brother so we didn’t see each other much. Also, my parents are musicians — both of them — so they traveled quite a bit. That was really hard on me and my sisters, and that’s a big part of what made me choose to stay at home with my kids.

Mariana: Starting out with breastfeeding was the norm in my family, but nursing past six months wasn’t. Actually, most members of my immediate family quit after no more than three months into it. It was one of those self-fulfilling prophecies, you know? Sure, breast is best — we’ll start with that, but we’ll stack up bottles and formula for when it stops working.

Between bad advice from care providers, no information and no support, the legend of women in my family just not being able to breastfeed came to be — in spite of the fact that my grandmother (who was a working, single mom in the late 40s, way before that was cool or even OK) breastfed my mom until she was 2!

It wasn’t until I got pregnant with Velma that things changed, and two of my sisters who had babies at around the time I had my oldest breastfed until their babies were 9 and 12 months, which is a big difference from quitting as soon as you get engorged because your doctor tells you your milk has solidified in your boobs. And yes, that’s a sad but true story.

SK: What about the rest of the country? Was nursing in public a big deal?

Mariana: Not at all, you’d see women nursing everywhere. If they were breastfeeding they would do it in public too, and with much ease. The general attitude about it was very relaxed. I remember my cousins breastfeeding at family gatherings and weddings, for example. No one would even flinch — just a baby getting to eat. I’m not entirely sure how things are there now, though I never got any weird looks or comments when I was there and nursed Velma in public. But I have been seeing “discreet” breastfeeding pictures pop up on Facebook, and that does make me a bit sad. Hopefully the general attitude won’t change, though.

SK: Tell me how you met your husband. 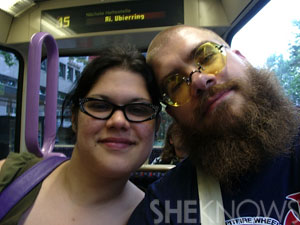 Mariana: My parents came to Germany to do a project with the WDR radio big band and met Mattis, who was here auditioning for the bass-trombone chair in the band. My parents joked around with the other Brazilian musicians about how he was perfect for me, and upon coming back home showed me pictures of Mattis, gave me his card, and went on and on about this great Swedish guy they had met. I told them they were certifiable!

But I checked Mattis’ website anyway, out of curiosity, and sent him an email saying just hello and “nice website.” I didn’t expect him to even write me back, really, but he did, and so we ended up writing each other back and forth as friends for 14 months, during which time he got the gig and moved here from Stockholm.

SK: What told you that he was “the one?”

Mariana: He says he knew from the moment the elevator doors opened and he first saw me in person, the day I arrived to visit. I guess I kinda just knew too. He was like no one I had ever met before and just seemed kinda perfect in an imperfect way, which just made him extra perfect! I felt very at ease and relaxed with him right away, it was like when [you] get somewhere and you just feel at home. That’s how I felt with him!

Mariana: Well, on the first day we just hung out as friends and had just a great time together, so we don’t consider that our first date, even if it did include a walk in the park, dinner and a movie at home, and tons of laughter. On the next day, we went out for lunch and then shot some pool afterwards. On the way home we got caught in this insane storm and ran around laughing in the rain until it started to hail (a lot!). It was pretty romantic! And since it was after we got back home that day that we shared our first kiss, that’s what we consider to have been our first date.

SK: Tell me how you decided to relocate to a different continent — how did you wind up in Germany?

Mariana: Mattis was already living here for work and unless one of us relocated, we’d be stuck only meeting about once every six months. That would just not do! I was a full-time student at the time, working toward a degree in graphic and industrial design. He had a well-paying, steady job. It was a no-brainer! If one of was were to relocate, it’d have to be me. So I did, because if I didn’t I just knew I’d never forgive myself for not giving our relationship a proper chance. Turns out it was the best decision I ever made!