What were on the minds and Twitter feeds of some of our favorite celebrity moms? Kristin Cavallari announced the birth of her son, Camden, via Twitter, while Jennie Garth addressed her sudden weight loss (sort of). Whitney Houston’s daughter, Bobbi Kristina, showed off her new tattoo via Twitter on her mom’s birthday, while Alicia Silverstone and Pink round out our list of top celebrity mom tweets of the week. 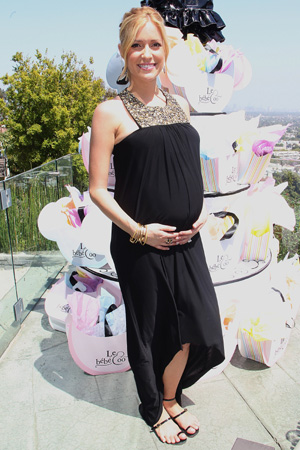 Kristin Cavallari tweeted the arrival of her baby boy with her fiance, Chicago Bears quarterback Jay Cutler, on August 8.

“We are thrilled to welcome Camden Jack Cutler into the world,” she tweeted. “He was born this morning weighing 7lbs 9oz. Everyone is doing great!”

Perhaps her son will take after Daddy, as Camden Cutler sounds like a great football player name! Camden is a Scottish name in origin that means “from the winding valley.” The name has been rising in popularity since it ranked number 362 in the year 2000, according to the Social Security Administration. It was ranked at number 160 last year.

Why do you think Cavallari picked this name? Perhaps she wanted to keep the “C” theme going with her last name and Cutler’s last name? Or perhaps she loves the Camden area of London? Tell us what you think of the name Camden Jack!

Whitney Houston’s daughter, Bobbi Kristina Brown, took to Twitter to share her thoughts (and her new tattoo) on what would have been her mom’s 49th birthday.

“Once it hits 12 am mommy it’s your birthday & I am going2celebrate it2thee fullest! Bc YOU deserve it da** it,” she tweeted.

She then wrote that she was going with her boyfriend to get a tattoo “for you mommy,” and then later posted a photo of her arm and her boyfriend’s arm with the tattooed initials, “WH.”

“Tat tat tatted YURP.. 😉 now your truly ALWAYS with us mommy (: we love you,” she wrote.

Kourtney Kardashian had yet to tweet about her daughter Penelope Scotland — until now!

“Meet my beautiful little angel Penelope,” she tweeted this week, with a link to her website that had a photo of her, Penelope and son Mason on the cover of US Weekly.

No other details were given except, “Pick up US Weekly this week to see more photos and read all the details.”

We were hoping for some tidbits of life with baby Penelope, but it looks like (at least for now) you have to fork over some money to find out how she is handling baby number two. At least we have this little bit of info from the cover: “Kourtney opens up about her first days home with Penelope and how Scott’s stepped up as a dad (but still hasn’t changed a single diaper!)” 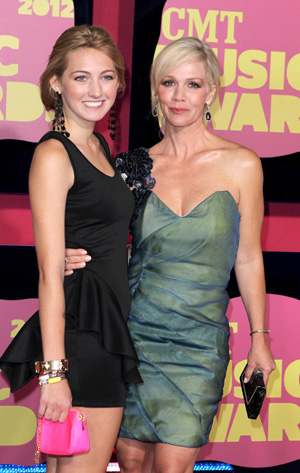 Jennie Garth has been spotted out looking quite a bit thinner recently, however the busy mom has had quite a year with the public divorce with Twilight star Peter Facinelli and she has also been busy promoting her new reality show, A Little Bit Country. The couple has three daughters together, Luca, 15, Lola, 9, and Fiona, 5.

Garth, seen here in June with daughter Luca, seemed to be trying to address that weight loss chatter with the tweet, “eat me,” with a photo of her holding up a cupcake.

The former 90210 star recently explained to Entertainment Tonight Canada about her weight loss. “I think anybody who has been through something like what I’m going through and have been going through for the past couple years, can definitely relate that your body changes with your emotional state of mind sometimes,” she revealed. “I think a lot of women can relate to that.”

“We have so many fruits at our ranch where we’ve been living… so eating healthy, especially with three girls, body image is something that I try to set a good example for them,” she continued.

“Stick it to Chik-fil-A with this yum-looking #recipe @PETA” she wrote, with a link to a vegan recipe.

“Chik-fil-A is pretty all around awful, so if you know someone who likes their sandwiches, hit ‘em with this recipe, courtesy of PETA,” she wrote on her website.

“Baby is asleep. This mosquito is not. Really?? I am sorry Alicia silverstone, but I wish I could kill it,“ she wrote.

Singer Pink is the new face of Covergirl cosmetics, and fellow Covergirl model Ellen DeGeneres welcomed her into the family.