We, the parents of special needs children — specifically those on the autism spectrum — should get along. Unity, it would seem, is part of the natural ebb and flow of our universe. Yet, that’s not always the case. 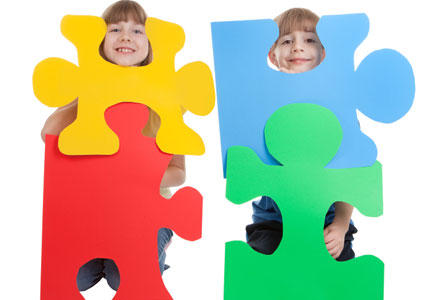 Disparity in the autism community makes the dissension in the Middle East, the House of Representatives and Senate, and those who find it acceptable to wear white after Labor Day and those who do not, seem downright pleasant in comparison.

The autism community — aka Club members — should get along. Alas, we don’t. Which is sad, because we all seemingly walk the proverbial mile in each other’s shoes. (Side note: I prefer shoes with a red sole, but I’m shallow like that.)

To speak or not to speak. That is the question.

Autism Speaks is the nation’s largest autism science and advocacy organization. Autism Speaks has been/is very good to — and for — my son and family, and therefore, has our support and gratitude. For us, Autism Speaks is an invaluable resource. Yet, there are others who protest against the organization because they feel Autism Speaks spends too much time and money on issues of causation and prevention, rather than on acceptance and defusing stereotypes.

Another major divider comes from who is on the Spectrum. For many years, while researchers referred to Asperger’s as high-functioning autism, it hadn’t been listed in the Diagnostic and Statistical Manual (or the DSM for short, which is the diagnostic bible).

However, in recent years, Asperger’s was officially placed into the autism category, causing tempers to flare. People with Asperger’s are vastly neurologically different from someone with low functioning autism. (Um, that’s why it’s called a Spectrum.)

Moreover, many with Asperger’s see autism as an identity, not as a medical condition, and fight against research for cures. While I respect those in the Aspie community for this belief, until my son — and the tens of thousands like him — can hold basic conversations and become socially aware, I will never stop raising money or awareness, or lose hope that there might one day be a magic cure-all that makes him more typical.

Hit me with your best shot

The dreaded “V” word. More offensive to some than the “B” and “C” words combined. Despite studies that prove otherwise, many in the autism community continue to insist that vaccines, particularly the MMR, caused their child’s disorder. The debate rages like characters in Dr. Seuss’s The Zax: They are stubborn and steadfast, and refuse to go in any direction other than their assigned directions.

How then, to explain my children? Both of them were vaccinated, and truth be told, I took better prenatal care of myself when pregnant with my son (I lived borderline Amish) than with my daughter. Yet, my daughter is neurotypical; my son is not. Another conundrum is how to explain vaccinated twins, where one is typical, the other not? Don’t expect this debate to end any time soon. There truly is less acrimony in the Middle East.

The autism community must come together. We must value and respect each other’s opinions, whether we agree with them or not. There must be middle ground for détente. Rodney King said it best when he stated glaringly obvious, “Can’t we all just get along?” We should, indeed.

Autism 101: The good, the bad and the ugly
A spectrum of Grey
I heart autism… sometimes

Shop These Chic Maternity Tops For Your New Pregnancy Wardrobe

17 hrs ago
by Brandi Jeter Riley

Gabrielle Union Says She’s a ‘Psychotic’ Mom to 18-Year-Old Stepsons, But Not to Kaavia