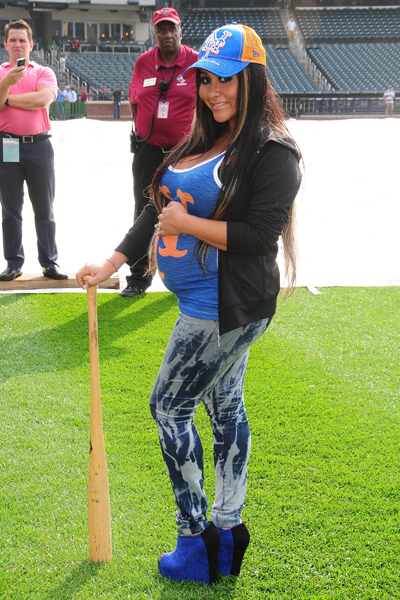 Pregnant Snooki decked out her baby bump in New York Mets attire, wearing a Mets tee, hat, skinny jeans and blue platform heels as she attended a game with her fiance, Jionni LaValle.

“Can’t wait to go to the mets game tonight! #believe #alwaysametsfan,” tweeted the Jersey Shore star, who is expecting her first child.

Let’s hope little Lorenzo (yep, Snooki has already announced his name) can’t hear in utero, as the pint-size reality star was reportedly booed at the game! In fact, after the MLB tweeted about Snooki’s appearance at the game, the Rays third baseman Evan Longoria tweeted, “This is what MLB is tweeting about? Why are we endorsing this?”