Forget man’s best friend! In many families, there is no stronger bond than the one between kids and pets. We love these pictures of kids with their best furry friends and stories about friendships that will warm your heart.

Is there anything as adorable as the bond between a child and a pet? Meet six furry pets and the families who love them. 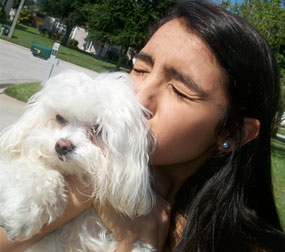 16-year-old Monica has owned Tito, a five pound toy Maltese, for five years. “Tito and I have a great relationship,” Monica says. “Ever since the day I got him, he’s slept with me in my bed and he even has his own pillow. He loves to have my company and I love to have his company. Every time I come home, he will always be there to give me some puppy kisses!” When Tito needs something, he knows to bypass the rest of the family and go straight to Monica. “I wouldn’t trade him for anything in the world!” she says. 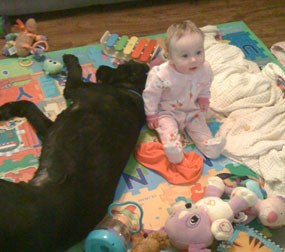 Kelly, who blogs at Temerity Jane, has two big dogs who adore her infant daughter. “Sheldon is a Newfoundland/Goldendoodle mix and he’s two and a half,” Kelly says. “He likes anything that Penny hands down over the baby gate or from her high chair. Pizza rolls, carrots, nuggets, entire sandwiches, whatever.” Both dogs have been gentle with Penny from the start, cuddling up next to her or serving as giant dog-shaped pillows. 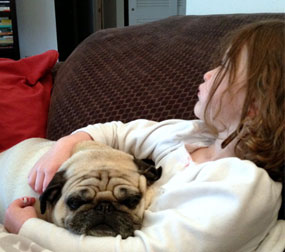 “Sunny’s been around long before my daughters, but I think she started living when they came around,” says blogger Jonna Rubin, who writes at Jonniker.com. Sunny is a 7-year-old Pug. “From the beginning, they were her babies, and she puts up with everything from tail pulling to hugs. Kissing my older daughter good night is part of Sunny’s bedroom routine. And in the morning? Snuggles.” Alllie, the newest addition to the Rubin household, has already been welcomed with plenty of kisses from Sunny. 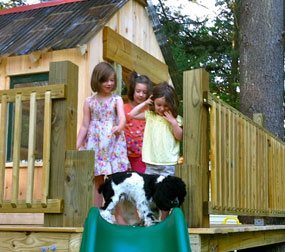 Amanda Magee and her husband built a playground for their three daughters and their 2-year-old dog, Beso. The girls spend hours outside with Beso, who plays around the slide and swings like he’s one of the kids. “Beso gives chase beneath the swings, miraculously never getting steamrolled,” Magee says. “Their dad puts Beso up on the platforms and he runs full speed to the slide and races down. When he isn’t sliding or running laps, he waits for the girls at the base of the slide. His favorite thing is to rest between the slide and the swings and watch the girls.” 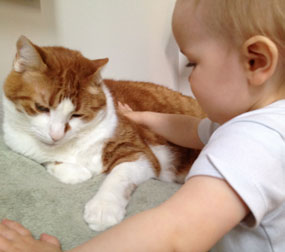 “Max has been unfailingly patient and loving with Ellie since pretty much the day we brought her home, in spite of repeated gropings and grabbings,” says Lauren Anderson of her infant daughter and 9-year-old cat. “The feeling seems to be mutual — her first word was ‘Daisy’ (our dog’s name) and her second was ‘kitty.'” 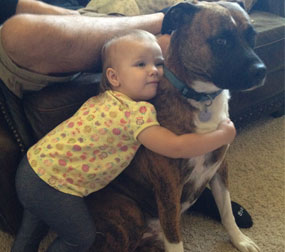 Despite being a little wary of 18-month-old Eriana, 3-year-old Boxer/Shepherd mix Rubeus gently endures her affections. “Eriana loves to hug, kiss and chase Rubeus around, much to his chagrin,” says mom Tara D’Angelo. “He is very patient and tolerant, even when she comes to try to pet him as soon as he gets comfortable in a new place, or when she tries to feed him dog food one piece at a time instead of letting him just eat. He loves to give her kisses first thing in the morning, and she greets him with a hearty ‘Hi Zoozoos’ (Rubeus is hard to say) when she sees him.”