Undoubtedly you have heard all the chatter online about new Yahoo! CEO Marissa Mayer. A long-time executive for Google, she’s the youngest CEO of a Fortune 500 company… and she’s pregnant.

A message to the new Yahoo! CEO

Undoubtedly you have heard all the chatter online about new Yahoo! CEO Marissa Mayer. A long-time executive for Google, she’s the youngest CEO of a Fortune 500 company… and she’s pregnant.

While working moms navigate compromises every single day after giving birth, the time when a woman first becomes a mom is uniquely special. I have personally taken two maternity leaves, one while co-heading the Mergers & Acquisitions group for IAC and one while running Urbanspoon, Citysearch and Insider Pages, a collection of consumer internet businesses that serve 50 million unique users a month and employ about 100 people.

When I saw my Facebook newsfeed alight with lively celebration of Marissa Mayer, I was similarly ecstatic both because she is a young, talented woman and because she announced her pregnancy on the same day as the Yahoo CEO news. As the post below notes, she is giving Yahoo a whole new meaning for women looking for relatable, or at least inspiring, role models. 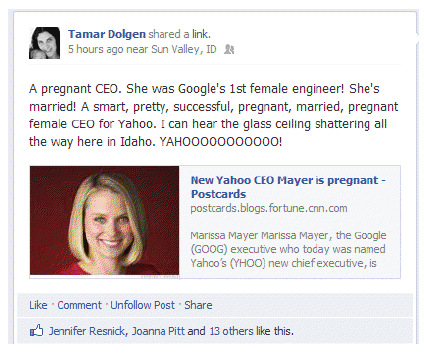 Out of these public and private media Marissa celebrations, it seems a new zeitgeist is developing around the importance of women with topics as diverse as the obvious — Influential Women in Silicon Valley — to the should-be obvious — Why Women Matter Online.

Whether Marissa likes it or not, the pregnancy news was truly the icing on an already great success story.

Women are still digesting how to have an impact after the recent Anne-Marie Slaughter article. Many were depressed by the inertia of the industries in which they work or hope to work. I for one was inspired, because as a thirty-something woman in an executive position, I felt I could start making a difference. I was left asking questions such as, ”What if every woman moved by this article came up with structural improvements for the world they influence?” and, ”Are there small changes to norms and scheduling that could go a long way in each of my talented friends’ professions?”

Whether Marissa realizes it or not, the way she treats maternity leave will serve as an example or an anti-example for all women looking for a path, for those women who do not want “to gap” their ambition, but also want to enjoy being a parent.

To be sure, Marissa is not a typical woman and her dilemma is not an easy one. But, I am a big believer that macro change is most likely to have an impact by starting at the top, with the most visible examples, however unusual the circumstances. The good news is that gender diversity is tied to economic results.

Figuring out how to strike a balance was a struggle for each. While I was out, there were mistakes made, but it also gave my direct reports a chance to execute against a plan we put in place prior. Maternity leave creates opportunity for senior leaders to manage their business through time-lapse photography. After a limited time of light management it is much easier to tell who moved through walls to execute and who did not. As I was struggling to determine the best course for me, my family and my businesses, I received unsolicited advice from many women who appreciated or regretted the way they took their leave. Much of the regret advice came with warnings such as “She was a hard worker” never graces anyone’s gravestone.

With the benefit of time and distance, my unsolicited advice to Marissa: Take a real maternity leave of some variety! Or at the very least, do not downplay its importance. Celebrate your role as the first ever pregnant CEO of a Fortune 500 company. While Yahoo may end up as the greatest internet turnaround of all time or it may limp along, 90 days will not ultimately determine its outcome. It will change you and may even make you better with the rare opportunity to gain perspective from the side of a crib.

Specifically, put together 12 week plans with clear defined metrics for each of your teams while you are on leave. Create rules by which your team should reach out to you and you will respond to emails. For example, “timely” goes for topics such as a decision around a critical partnership that may lock you up in exclusivity for a year. Generally speaking, any major decision (define major by a metric like level of revenue or traffic) that cannot be changed when you return should be run by you. Focus your time and attention on the big needle movers — key hires and key strategy decisions. If your brain has to work well early in the morning, meet your friend, the coffee pot, or ask your husband to take the nighttime feedings.

Marissa, you have an opportunity to create an even greater legacy to women and men everywhere by building a culture that finds the balance between business achievement and emotional satisfaction. Yahoo is your company. You are a rock star. Do not be afraid to be different and change the world. I look forward to reading your story to my grandkids someday.

Kara Nortman is the senior vice president, consumer businesses for CityGrid Media, an IAC owned online media company that connects web and mobile publishers with local advertising organizations by linking them through CityGrid®, its local content and advertising network.

7 Habits of successful women
Nicole Lapin’s tips on being young and successful
Career women: Mentor your way to success

Has the Family Vlogging Trend Gone Too Far?

12 hrs ago
by Kimberly Dawn Neumann