The FDA has banned the use of bisphenol-A, or BPA, from the manufacture of baby bottles and sippy cups — read on to find out what the risks of BPA are and what other items it still may appear in. 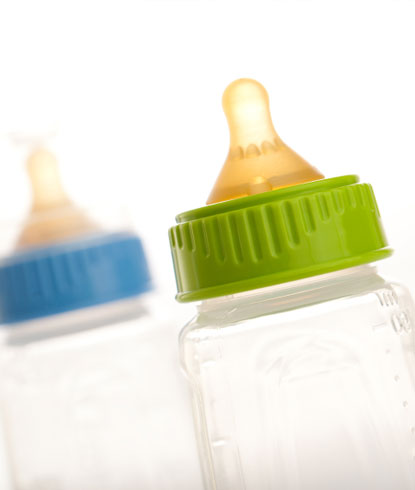 No more bpa in baby bottles

The FDA has banned the use of bisphenol-A, or BPA, from the manufacture of baby bottles and sippy cups — read on to find out what the risks of BPA are and what other items it still may appear in.
The U.S. is following the example of Canada and the European Union by banning bisphenol-A from baby bottles and sippy cups. Most, if not all, companies in the U.S. have already phased out use of the controversial plastic-hardening chemical, but now if one wanted to use the substance they aren’t allowed to do so.

BPA may be in any number of plastic items in your cabinets, purse or even your mouth. Here are a few places you may find BPA:

“This is a big day for everyone who has worked so hard to get BPA out of our sippy cups and baby bottles, especially the families who have lobbied the government to do the right thing for our kids,” said Jean Halloran, director of Food Policy Initiatives for Consumers Union. “Scientific studies show there are serious health risks associated with BPA, and this action by the FDA will help protect millions of the most vulnerable Americans. FDA’s next step should be to ban this chemical in infant formula containers. Babies’ exposure to BPA should be minimized in every way possible.”

BPA is known as an endocrine disruptor, which means that it can alter the structure or function of our hormones — including our thyroid and our reproductive system. The biggest dangers of the chemical may be to our youngest family members — hormones regulate development of our babies in utero, and rodent studies have shown that damage from the chemical can range from neurological issues to having negative effects on the timing of puberty and fertility rates in adults.

While studies in human populations are not as easy as they are in laboratory rats and mice (no one would volunteer to expose their fetus to BPA for scientific research), there are trends that are occurring in the United States and other industrialized nations that echo rodent studies, such as an alarmingly reduced sperm count among males and an early onset of puberty in females. Some studies also point to BPA exposure as being a cause of cancer, particularly prenatal exposure.

Avoid plastic if you can, especially if you are expecting a baby. Eat fresh, organic produce and try to avoid prepackaged foods. Avoid exposing any plastic items you have to high heat, such as in a dishwasher or microwave. Chuck your water bottles in the trash and use glass or stainless steel. Look for “BPA free” on the products you buy your children.

“Six years ago when my son was born, there was only one company that offered BPA-free bottles,” said Kelly, mom of two. “Now, most bottle companies do. It is such a huge testament to the power that women and mothers have in this country. We spoke with our dollars, we signed petitions, and we were heard. That is awesome!”