Meet Amy, mom of four. Her last baby was born at home, which isn’t unusual, until you learn that she had no medical attendant present — at all. Read on to learn why she and her husband chose that route and what their plans are for their next baby. 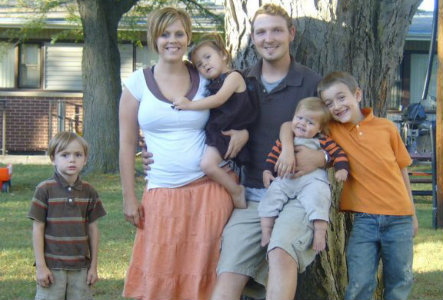 Amy lives in Nebraska with her husband and four children, and is expecting a Christmas baby at the end of this year. Her fourth baby came into this world at the family’s home, but there was no doctor, midwife or other medical personnel there. It wasn’t an emergency — it was a planned unassisted childbirth (UC), and is not as crazy as it sounds.

We were able to catch up with Amy and learn why she chose this method of birth and what they have planned this December.

SK: Tell me a little about yourself — where you grew up, where you live now?

Amy: I grew up in the small town of Harvard, Nebraska. I lived there my whole growing-up years and graduated high school there. Went to college in Norfolk, Nebraska at Nebraska Christian College for a semester and then got married and we have kind of moved all over Nebraska and for a brief stint in Kansas where my husband is from. Currently we live in Lincoln, Nebraska.

SK: Did you have any attachment parenting role models in your life as you were growing up?

Amy: Funny you ask. I have been trying to figure this one out a lot lately. I wouldn’t say yes per se — although my parents were pretty hands-on, they definitely weren’t AP. I think I had an older cousin who was probably my biggest role model in that department (although I’m sure she had no idea). I know that is where I saw breastfeeding from the light of “no big deal, when Baby is hungry it’s just something you do wherever you are.” I’m very thankful for that.

Despite not having a huge AP role model from an early age, I always wanted to be a mom, and for me I knew very specifically what kind of mom I wanted to be — how I wanted to care for my children; I guess it was just instinctual more than anything. No one had shown me but also no one had taken that away, if that makes sense.

SK: When did you meet your husband? How did you know he was “the one“?

Amy: Austin was from Kansas but was going to school at Nebraska Christian College and needed a summer job. One of his good friends was going to work at a log home building business in my small town. We ate supper together a lot at their house as well as I worked at the grocery store and he often came in there.

He came back to work the following summer also and that is when he offered to fix the stereo in my car. I brought my car over for him to tinker with that night and after that we were pretty much inseparable. When I went off to college he quit his job, followed me — and the rest is history. We were engaged a month and three weeks later to the shock of our friends and family. And as far as how did I know, well, it’s cheesy but I just knew. I think when you know, you know.

SK: Did you both have similar philosophies when you began discussing having children, or did you both inspire one another as your children came along?

Amy: We discussed things a little but I don’t think you really know until you start having them. I think we just both feed off of each other. The one thing I did know was that I wanted to be there, to be physically present. I wanted parenting to be my main focus rather than a nine to five job. I didn’t want to miss one second of their little lives. And I didn’t want them to grow up with a babysitter who was closer to them than I was or feeling like they were constantly being shoved off with someone else.

Amy: When it was time to choose a provider, the receptionist said, “Would you like to go with the midwife we have?” and I said, “Sure!” and that’s how it all began. I’m not sure I put much thought into that part but I remember being excited when I heard the term midwife and I vaguely knew what that was.

I ended up being induced on my son’s due date. It was of my own hounding that this came about not because of any medical necessity. I wasn’t where I am now and just didn’t think anything of it. Like many first-time moms, I was a frequent flyer saying, “Is this it? Is this labor?” I didn’t know it was OK and dandy to go after your due date.

I was very excited about the birth pool. My plan was to birth in water. Oh that tub was heavenly. It was a hard-sided Aqua Doula and the depth was amazing! I could go on and on about how it felt to be in there. Contractions slowed down so I ended up getting out so I could be hooked back up [to] the pit and that was kind of a trend… get hooked up, get them going and monitor, get unhooked, get back in the pool and relax. After some pushing in the water I ended up getting out and delivering him on land.

After two and a half hours of pushing, at just after midnight, (12:06 to be exact), I met my little boy Kalel. He was 8 pounds, 2-1/2 ounces. Everyone seemed suprised at his size. I was so so happy! We have it on video and the first words out of my mouth are, “Oh yay! Now we can have another!” Of course everyone laughed but I was serious. I was a mom and I was hooked! Recovery was wonderful!

17 hrs ago
by Julia Guerra