We recently had the chance to chat with David Koechner and his wife Leigh, one of the funniest parenting couples in show business. David is perhaps best known for his role in the movie Anchorman, and his wife Leigh is a busy talk-show host, budding author, blogger and uber organized mom. 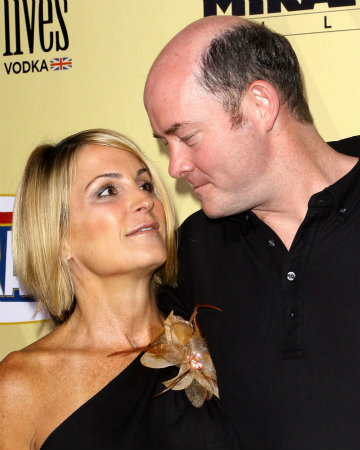 You two have so much going on in your house! Raising little ones is so hard. With five kids — including a set of twins — you probably have some amazing secrets on how to keep everyone moving along and still functioning, Leigh! Any tips for other moms out there who may be struggling to get it all done?

Leigh: I have found the more prepared I am, the smoother things go for everyone. Every night before bed during the school year, everyone’s backpacks are packed and lined up at the door, the snacks are ready and in their lunchboxes, and I try to do as much prep beforehand so that things can be easier.

David: Even down to putting their shoes by their backpacks. Otherwise, one person is missing one shoe and we are all late for school.

We love how you say that parenting is funny, because there is so much about being a parent that is funny. Do you both think that your sense of humor helps you be a better parent?

David: I’m not sure it impresses the kids! They don’t always think it’s funny. Like my son, I remember being in a special carpool and we were going on a field trip. The night before [the field trip] my son said to me, “Dad, tomorrow no jokes OK?”

Leigh: I think the biggest thing with the laughing is, when you’ve had a particularly rough day with your kids or you feel burned out. Those are the times when Dave and I are together that we laugh, and it helps restore some balance.

You are both so funny, and together are such a funny couple. You two recently became spokespeople for Huggies. Do you enjoy working on joint projects or does it add a level of crazy to your life?

Leigh: I have been trying to work with my husband for 14 years! I was so excited for the Huggies opportunity because it was for the both of us, so when we accepted the project I was excited that we would finally get to work together.

Leigh, you have some really fun content on your site AbsoluteLeigh.com but you also have some very heartfelt blog posts that you write. Do you enjoy writing, and do you have any books on the horizon?

Leigh: What an awesome question! You know, we used surrogates to carry four of the kids. After each surrogacy, people would tell me I needed to write a book but I never felt like I had a book in me. Then after we had Eve, our last baby, and we had gone through all of our frozen embryos I realized that I was ready to share that story. I have just written a book proposal — it’s called AbsoluteLeigh Infertile — and I am just starting to shop it right now to agents. I am looking forward to writing that and sharing with people who are struggling to create a family.

I’m also on EverydayFamily.com doing a talk show for parents called EverydayFamily Room. I’m having a blast doing that, and I’m also doing a parenting segment on Today in LA on Monday mornings called AbsoluteLeigh 4 Parents which I am really excited about.

We can’t chat with David without bringing up Anchorman 2. Are you looking forward to working on the sequel, which starts shooting in early 2013?

David: Ever since the first picture it’s just grown and grown — became a popular, iconic movie, really. So I am happy it’s being made because I’ve been asked for the last seven years when the next one would be! People are so excited and are already asking if we are done shooting, since the announcement was made a few months ago.

1 hr ago
by Cindy McCain