Happy Wednesday Hump Day — also known to us at SheKnows as Celebrity Baby Bump Day. Kourtney Kardashian and Sienna Miller have both had their babies, but new celebrity moms have joined the pregnancy club! We spotted actress Rachel McAdams — with a baby bump! Lily Allen is reportedly pregnant with her second child, while Anna Paquin was spotted looking chic in a bump-hugging tank dress. Matthew McConaughey’s wife, Camila Alves, rounds out our list of the cutest pregnant celebrities. 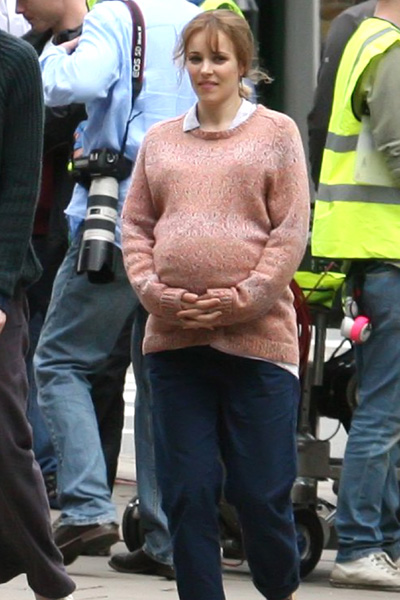 Rachel McAdams was spotted in London’s Notting Hill neighborhood looking very pregnant — but, unfortunately,  this baby bump is bogus! The actress was wearing a fake baby bump while filming her newest movie, About Time, which was written by Bridget Jones’s Diary filmmaker Richard Curtis.

Even though this is a faux baby bump, perhaps the real thing isn’t too far off? McAdams, 33, has been dating 43-year-old actor Michael Sheen since 2010. She even hinted to the fact that babies are in her future, saying she was “looking forward to it someday… Having a few [kids] would be great.”

Am I the only one that hopes she gets back together with her The Notebook co-star, Ryan Gosling?

Next up: Anna Paquin wearing the same maternity dress worn by Reese Witherspoon and Kristin Cavallari >>

53 mins ago
by Susan Borison