Kristen Finch, 35, of northern Illinois, and mother of two kids ages 5 and 6, knew something was wrong with her husband, David, shortly after they got married. His strange behavior, odd social skills and quirks led to a diagnosis of Asperger’s syndrome. Learn how her husband’s diagnosis strengthened their marriage, below.

by Kristen Finch
as told to Julie Weingarden Dubin

I met the future love of my life, David Finch, in preschool. We became good friends in high school and started dating after grad school when we both moved to the same suburb and lived across the street from each other.

I always thought Dave was funny and I was drawn to his quirky behavior. But after we were married in 2003, his odd behavior came between us, and things started going downhill.

I noticed how rigid he was over schedules. We’d be on our way to my family’s house for a holiday meal and he’d grill me in the car about what time we were leaving, how long before the meal would start, what foods were being served, who would be there, where we would eat? He really enjoys my family so I knew it wasn’t that he didn’t want to go, he just really needed a schedule. He had a hard time adapting to changes in his routine.

While working as the speech pathologist in a school district, I started seeing similarities in social function between Dave and some of my students with Asperger’s syndrome, but didn’t really think he would fit the diagnosis. Asperger’s is a neurological disorder that’s characterized by normal cognitive functioning but impaired social functioning and restricted and repetitive interests.

A few years later, I found an Asperger’s quiz and as I read the questions, I kept thinking, “Gosh, that sounds like Dave,” and “Wow! Dave does that!” I immediately gave Dave the quiz. My hunch was right and in 2008, Dave was diagnosed with Asperger’s by a psychologist.

After the diagnosis, Dave decided to take on our marriage as his special interest project. As soon as he had a “reason” for why things had been so hard, he went into problem-solving mode. Dave started writing notes as reminders to himself, such as, “take initiative” (that was taped to our bathroom mirror for months), “help her with the laundry,” and “use your words.” He felt like that’s what he needed to do, and I was happy to support him. Dave documented our journey in his book, The Journal of Best Practices (Scribner). After the book deal, Dave left his audio engineer job to become a writer and public speaker, and he writes a blog for Psychology Today.

Despite our struggles, the love was always there, and the key was we both wanted to make our marriage better. I knew all the things I could do to make things easier for him, to accommodate his needs which, in turn, would improve our marriage.

Learning that Dave has Asperger’s essentially gave me a “user manual” to how he operates. I now have a better understanding of how his brain is wired, what things he may grapple with and what sorts of things he will be great at. I learned that I needed to be literal and direct, and add more structure to our family routine. The hardest thing for me is the rigidity; I happen to be very laid back, so it goes against my nature to be very fixed, but I’m learning and work hard on it every day.

Dave’s always been a phenomenal dad. I absolutely love watching him with the kids. Our kids are still young but they’ve noticed some of Dave’s behaviors. We just explained that Daddy’s brain works a little differently. 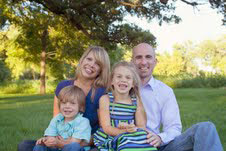 The diagnosis gave us insight as to how we could work better as a team to parent the kids. Dave has a hard time being in the moment, because he’s always thinking about the process or coming up with solutions to any potential problems. For example, if my son wants to play trains, Dave will often get stuck in the process of making the train track and my son just walks away. In those moments, I’ll remind Dave, “Get out of your world and get into his. You’re missing this moment!”

I’ve learned I just need to do what works best for my kids and my family. I hope my children learn from me that everything turns out fine in the end. I also hope they take after their dad and do what they were born to do, whatever that may be and to follow their dreams.

It’s OK to feel sorry for yourself, but only for about a day and then pick yourself up and do something productive. Exercise — it will always make you feel better. Set aside couple time with your partner every week. It’s so important to reconnect.

15 hrs ago
by Christina Crawford