Ah, that embarrassing moment when your toddler repeats a swear word, calls you a bad name or pulls his pants down in public. Here are a few tips on how to steer your little one into more socially acceptable behavior. 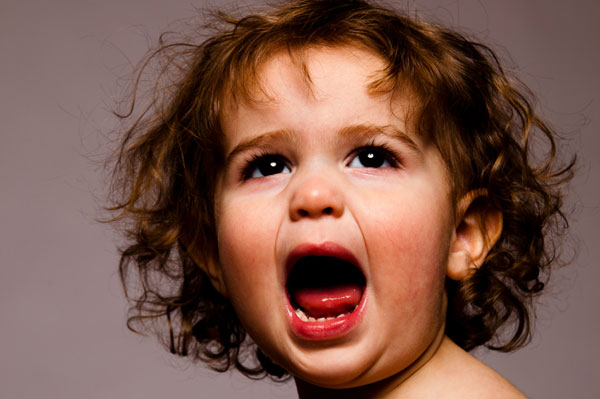 Toddlers are famous for repeating the words we’d rather they not and stripping their clothes off at inopportune moments. So how in the world can we correct the behavior of someone who completely ignores reason?

One thing you can do is not do the inappropriate behavior yourself. Toddlers are constantly observing and learning from those around them, so if they hear you let off a string of expletives they will likely be keen to repeat them later — loudly, in the middle of a busy restaurant. Of course, Mom and Dad aren’t likely to parade around in public naked, but you can and probably should monitor your word choices if you don’t want your little one to repeat swear words.

Honestly, it can be really hard to not smile or laugh when your pint-size kiddo says a bad word in her sweet little voice, but really, try not to — even if it means going into the other room to have a snort or two. “Ignoring it works the best,” shared Rachelle, mom of two. “If I even giggle, my kids march around the room saying the offending word.”

If you see your toddler getting ready to disrobe in public, steer him quickly in another direction — physically, or with words. Point out something to play with, talk loudly about the birds flying in the air or challenge him to a sprint. If your darling toddler girl happily calls you “stupid” at the fabric store and she seems to be poised for a quick repeat, change the train of her thoughts while giving her a nicer word to say, such as “silly.”

It’s also a good idea to correct the behavior, even if you think a toddler is too young to understand. “When my son has done things like pull down his pants in the middle of the aisle, I pick him up and have a quiet conversation about how we can only be naked at home,” Noelani, mom of two, told us. “He is told that we have to keep our clothes on in public and it is rude to do otherwise. I get him to agree to leave his clothes on before I put him back down.”

Sometimes, it’s just a matter of time. Your child will likely not be trying to pee in public when he’s in kindergarten, so if the above tips don’t give you any relief from your toddler’s embarrassing and socially awkward habits, then give him time to mature.

Don’t give up on ignoring, redirection and correction though — as your toddler grows, he’ll begin to be able to understand and process how his behavior affects those around him and can internalize the lessons you teach.

Have your child throw a safe tantrum

Have your Child Throw a Safe Tantrum – Daily Dish
Today on the Daily Dish, our host Anne Wiggins gives tips on how to make sure your child throws a safe temper tantrum.