Kids love Independence Day with all the fireworks, picnics, fun and games. In addition to all the festivities, it’s also important for parents to teach their kids about the history and meaning of Independence Day. 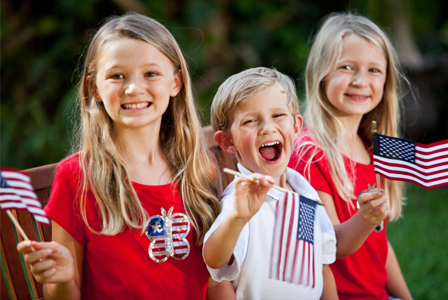 Brush up on your American history

Before you start talking to your kids about Independence Day, brush up on your history. Considered America’s birthday, Independence Day marks the anniversary of the day the Declaration of Independence was adopted by the Continental Congress — July 4, 1776. That means that this year — 2013 — marks America’s 237th birthday. The first Independence Day wasn’t celebrated on the 4th of July but rather four days later on July 8, 1776 in Philadelphia.

So did our Founding Fathers plan on Independence Day becoming such a big celebration? Well at least one of them did. John Adams said of Independence Day, “I am apt to believe that it will be celebrated by succeeding generations as the great anniversary festival. It ought to be commemorated as the day of deliverance, by solemn acts of devotion to God Almighty. It ought to be solemnized with pomp and parade, with shows, games, sports, guns, bells, bonfires and illuminations, from one end of this continent to the other, from this time forward for evermore.”

Check out these Fourth of July activities for kids >>

Ask your kids what they know

Maybe your kids know more about Independence Day than you think. They may have already learned in school about why we celebrate on 4th of July. Ask them about the meaning of Independence Day and help them fill in the blanks. Talk about the Boston Tea Party and why it happened (the colonies were opposing taxation by England and King George II without representation). Discuss the Revolutionary War, the First Continental Congress and the Declaration of Independence.

Quiz your kids about the important figures of the time including Samuel Adams, Benjamin Franklin, John Hancock, Patrick Henry, Thomas Jefferson, Paul Revere and George Washington. TheAmericanRevolution.org has a great list of the important people of the American Revolution and plenty of other information about this time period. On Independence Day, read to your kids from books about the American Revolution. Also read popular Independence Day quotes and poems together.

Teach them about the flag

Young kids can learn about Independence Day by coloring the different patriotic symbols such as the American flag, the Liberty Bell, Uncle Sam and more. Print coloring pages and other printables for Independence Day.

Read the Declaration of Independence

With older kids, read the Declaration of Independence together and talk about what it means. Create a special declaration for your own family — a set of rules, standards and ideals to live by. Print it out and have everyone in the family sign it.

Teach your kids the words to the national anthem — “The Star-Spangled Banner” — and sing it together. Other patriotic songs that are suitable for Independence Day include “America the Beautiful,” “God Bless America,” “I’m a Yankee Doodle Dandy,” “This Land is Your Land” and “You’re a Grand Old Flag.”

On 4th of July, sit down with your kids and watch a movie about Independence Day — and we don’t mean the Will Smith movie of the same name. The Patriot, 1776, Revolution, Drums Along the Mohawk and Last of the Mohicans are great choices. For little ones, Ben and Me is an appropriate option.

Take a trip to a historical landmark

If you are fortunate enough to live near one of country’s great historical landmarks, plan a visit — even if not on Independence Day. Don’t live close by? Don’t worry, you can take a virtual trip online. The internet offers pictures, videos and information about a variety of historical landmarks and places from the Revolutionary War. This offers a terrific opportunity to teach young kids about how to research on the internet. Learn about the freedoms we were fighting for and what life was like before the American Revolution.

Even when teaching your kids about the historical aspects of Independence Day, keep things lighthearted and fun. In addition to all the learning activities, create 4th of July crafts, sample red, white and blue foods and play Fourth of July games on Independence Day.

More about Fourth of July