Single mother Monica Abington was a busy entrepreneur running a successful lawn-care franchise and raising her four children when the unthinkable happened — she was diagnosed with a brain tumor. 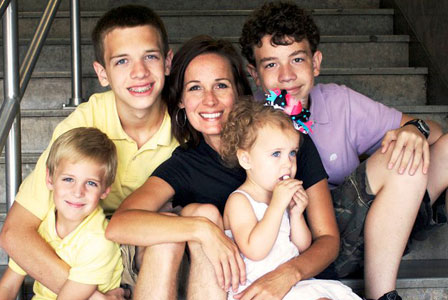 When faced with surgery that could leave her paralyzed or unable to speak, she moved forward with courage and grace — and came out on top. Keep reading for Monica’s incredible story, and what we can all learn from her strength.

Monica Abington was already the owner of a successful Weed Man franchise when she was diagnosed with a brain tumor in December 2010. She had assembled a tightly-knit staff she considered more like family than employees. Her belief when it comes to her employees is that, “A quality investment produces a quality yield. I’ve invested in all of them on an individual basis, hopefully always more positive than negative. They hear me say quite often that my biggest desire is to be their biggest fan.“

When Monica was diagnosed with a brain tumor and surgery was her only option, she faced it with the same approach that has helped her be successful in business. “For me personally, I’ve always been somewhat of a risk-taker. I grew up in an entrepreneurial family. When all of this [her illness] came about, it was obviously devastating. It was devastating on the level of having the four children and being a single mom.”

She took a positive approach to preparing for her surgery by compiling what she refers to as “Monica manuals” for all aspects of her life — both home and work. Making sure that her children’s lives were as uninterrupted as possible during this complicated time in her life became the most important focus for Monica. Her brain tumor was removed in January 2011, in a difficult surgery that could have left her either paralyzed or unable to speak.

Check out these commonly misdiagnosed health issues for women >>

Back on her feet

Monica came out of surgery with her left side paralyzed, but that didn’t stop her. Her can-do attitude stayed intact during her recovery period, and three days post-surgery she came home from the hospital. Within two weeks she was able to walk, although slowly, and eventually the paralysis subsided.

Her bedroom became the new command center for Monica’s business only two weeks after surgery, when she took charge and started to reclaim her life. Monica’s strong support network within the Weed Man franchise became her lifeline during her illness and recovery. She feels that keeping her successful business running without interruption would have been almost impossible without the support she had from both her employees and franchise owners in neighboring cities.

Throughout her whole illness and recovery, Monica worked hard to keep life as normal as possible for her children. It was difficult for her in the beginning to rely on others to help care for the youngest of her children, since she was unable to lift her daughter while recovering. Her spirit and resiliency seem to have been passed down to her children, who made straight As and Honor Society even during this difficult time when their mom was recovering.

“I wanted my kids to feel that we would all be fine after the surgery, and if not that we would figure it out together,” Monica says. “I used to say unfortunately — but I’m beginning to say fortunately — we’ve had these experiences, therefore they [her kids] have a great handle on reality. This is life. It’s never as good as it seems, and it’s never as bad as it seems.”

How to prepare for breast cancer surgery >>

It looks like we could all learn a bit from Monica’s story of resilience and strength.

More about strength and courage

Key to happiness: Finding your personal strengths
5 Reasons inner strength is a must for raising children
The courage to rebuild after a break-up or divorce