Aha! Has your man ever made a comment about your, ahem, emotional moments — especially those that have to do with pregnancy, childbirth or bonding with Baby? Well you can let him know about a study that followed more than 600 men from single status to daddy status. Turns out that testosterone drops when a man becomes a dad. And the more he gets involved with taking care of the baby, the more of a dip it takes. From the funny to the sweet, moms reveal their man’s “manopausal” stories. 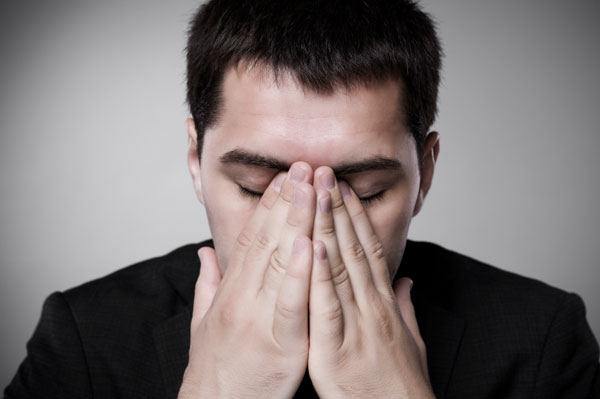 The landmark five-year study conducted by researchers at Northwestern University followed hundreds of men from bachelors to fathers and determined that when a man becomes a dad, his testosterone level drops. And the more involvement Dad has, the lower it dips.

So why does it happen?

According to Rallie McAllister, M.D., M.P.H., a family physician and co-author of The Mommy MD Guide to Pregnancy and Birth, “It’s likely that testosterone levels fall in men to foster nurturing behaviors and to put a damper on mating behaviors. Since these can interfere with the responsibilities of fatherhood, it’s advantageous — and it makes perfect sense — for the male body to produce less testosterone after the birth of a child so that men will be more willing and able to take care of their newborn offspring and be less interested in mating, at least temporarily.”

My husband turned into “a pile of mush”

McCallister shares her own story of her husband turning into, as she calls him, a “big pile of mush” after she got pregnant. “Early in our relationship, I got kicked in the leg by one of my horses, I fell to the ground, writhing in pain and agony. I remember my now husband (an ER doctor) standing over me asking impatiently, ‘Where is the point of maximum tenderness?’ I almost decided right then and there that our relationship just wasn’t going to work out!”

“But after I got pregnant, I tripped and fell on the steps in front of our house. It was nothing compared to being kicked by a horse. Still, he got down on his hands and knees to check on me. He had this panicky look on his face and he kept saying, ‘Are you OK? Are you hurt?’ That’s when I knew that my husband’s ER-hardened heart had melted.”

“My husband turned into a softy”

“Being a pediatrician, my husband has always loved kids, but after our sons were born he became such a softy. He cried at their first shots, and more recently he wept at the straight-A report card my oldest (12 today!) brought home at the end of the year! He is the one they yell for when they have to vomit, and then they sleep with me in between!” says Heather Lubell, MD, a pediatrician at Yardley Pediatrics of St. Christopher’s Hospital for Children.

“My husband cried like a baby for the first time”

Elizabeth, a mother of two from California says her husband was always in control of his emotions until she became pregnant. “I’d never even seen him cry until our first ultrasound and then the tears just flowed and he bawled like the baby we were soon to have.”

So does testosterone ever “go back” to where it was before a man became a dad?

How can women capitalize on this “softer side”?

McCallister makes this suggestion, “Give lots of positive reinforcement and praise. If you like seeing the softer side of your man, let him know! Be specific with your feedback, by saying things like, “I love it when you sing to the baby. See how it relaxes her?” or “Thank you for making me a cup of tea; it makes me feel special and loved.”

Causes of hormonal imbalance in women
Fact or fiction? The mommy brain
Symptoms of postpartum depression