Tara Garz had always wanted to breastfeed, but when her baby was born, everything that could go wrong did, and she wasn’t sure they could make breastfeeding work. 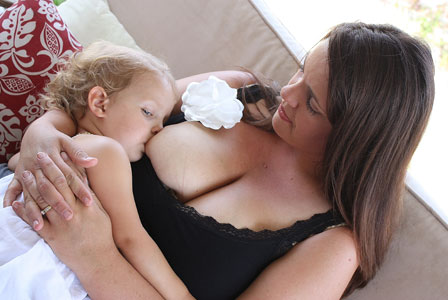 After a lot of wrong turns and mishaps, they did conquer early latch problems, pumping and supply issues to go ahead and nurse for nearly 40 months. Here is her story.

By Tara Garz
as told to Monica Beyer

I always planned to breastfeed. I didn’t worry about it — I figured it would be no problem. My best friend had nursed her three children and my mom nursed me. Both promised to help and support me. The newborn parenting class at the hospital assured me that qualified lactation consultants would be available to help me 24 hours a day. I figured, no problem.

Gee, was I wrong

Breastfeeding my little girl was probably the biggest challenge I have ever faced, but I am proud to say that we made it.

Mia was born via a planned C-section on November 4, a Tuesday morning. When the doctor told me I would need a C-section, the first thing I asked was if it interferes with breastfeeding. I was told it would be no problem. I disagree. I think now, that a C-section does present challenges for nursing moms, especially inexperienced and naïve ones like me.

The epidural procedure was awful and took about an hour. As a result, I had an epidural that numbed me from the knees down and another from the waist down. I had some serious numbing going on. I realize now that this was one of the first hurdles we would have to jump as Mia was extra sleepy. After Mia was born, she was shown to me and then whisked away to the nursery. I didn’t see her for over an hour.

Finally she was brought to me, and then it was still another half hour or so before someone came to help me nurse her. I couldn’t move my body at all so I needed help. Mia refused to latch and was sleepy. The nurse tried for maybe five minutes and then said not to worry, we would try again later.

Well, that is the line I heard over and over again for the next 24 hours. Everyone said not to worry, so I didn’t. They made it seem so normal that the baby wouldn’t latch. I was in a lot of pain and couldn’t move, so I took them at their word. I had an allergic reaction to the pain meds and was given sleeping pills instead. At the time, I thought everything was normal, but looking back I realize I was crazy to take sleeping pills when I was trying to learn to nurse.

For the first 24 hours, we kept trying to nurse every three hours. Mia would latch for like 20 seconds and then break off or fall asleep. We couldn’t get her to wake up. I know now this was a result of the pain meds, double epidural and sleeping pills. I know it sounds obvious, but everyone told me those things were perfectly fine with breastfeeding. I believed them.

After she fell asleep, the nurse would take her away and tell me not to worry. Three hours later we would try again. Once 24 hours was up, formula was brought in. I was in shock. All this time I was told not to worry and now formula? If I had known this would happen, I wouldn’t have let them take her away from me so often and would have tried a lot more often.

I resisted for another six hours, but they wore me down. A fabulous lactation consultant brought me a pump and I started pumping. I got one milliliter of colostrum which was mixed with four milliliters of formula and they taught my husband to finger feed my little girl.

Here is where all of my troubles truly began. Mia now refused to latch at all. She wanted to be finger fed only. It breaks my heart knowing my baby girl’s first meal in this world came primarily from Nestle and not me.

For the rest of the hospital stay I pumped every three hours and after that initial feeding was able to finger feed her expressed breast milk and colostrum. I was also given a nipple shield, which was to help her latch, but it didn’t work. I continued to try and use that thing for weeks with no success.

We went home on Friday. Mia was jaundiced and was almost not allowed to leave. I wish now we had stayed, as maybe more help would have gotten us there. Who knows though? She had to feed every two hours. So for every feeding we would attempt to nurse for 10-20 minutes because she would latch, but then fall asleep. Then we would give her expressed breast milk via a finger feeding and then I would pump. Then it would be about time to start again.

“Here is where I started going crazy.”

Everyone gave me different advice. My mom said not to feed her, then she would get hungry and nurse. The nurses and doctors told me I had to measure her food because of her jaundice, so even if she nursed a little, I had to give her a certain amount of breast milk via the finger feed. It was awful.

We couldn’t get enough milk in her because the syringe was so slow. I was going to have her weighed every other day as she wasn’t gaining her birth weight. She had jaundice blood tests every other day too. I was going to see a lactation consultant every day too. I was exhausted and so emotionally drained. I cried constantly because I could see my dream of nursing slipping away.

About five or six days in, Mia started to hate the breast. She became angry and belligerent when it was offered to her. The next step was to start using a supplemental nursing system (SNS) which is basically a tube filled with breast milk taped to my breast. Between this, the shield and my large (40H) breasts, attempting to breastfeed became a logistical struggle. I needed four hands and only had two! I kept trying and trying and still Mia wouldn’t latch.

When she was 11 days old, I succumbed to the demands of her pedi[atrican] and my husband and gave her a bottle. I cried the whole time, but she seemed so happy to finally be getting enough milk. Within a week she was gaining like crazy and we no longer had to worry about weight or jaundice. However, my babe was addicted to the bottle and it took nine more weeks to finally coax her to the boob.

For the next nine weeks I pumped like crazy and just didn’t give up. I went through sore nipples with that pump, plugged ducts and just the sheer exhaustion of pumping. You can’t pump and care for a baby at the same time. I pumped eight to 10 times a day for 30 minutes each time. It seemed like whenever I sat down to pump, my baby would cry for me. I felt so useless hooked up to that damn pump! 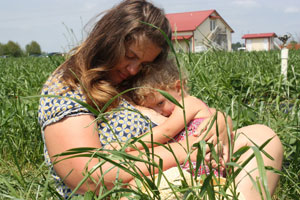 I continued to see my lactation consultant three times a week. Occasionally, Mia would latch with the SNS at a lactation appointment and my hopes would soar. Then she would refuse the breast and scream at the very next nursing. It was a roller coaster ride of emotions, with mostly downs. We decided my milk just didn’t flow fast enough for her and so I started taking fenugreek to up my supply. Still no go. Then we tried Reglan. This did up my supply quite a bit, and Mia started latching more and more often but didn’t actually transfer any milk. Week eight we decided to try a nasal spray to increase my letdown so Mia would get immediate satisfaction when latching. It didn’t work.

By this time I had had enough and decided to quit. I would just pump (which I hated doing) and bottle feed one day at a time, and quit when I’d had enough. The Reglan had upped my supply, so I actually had extra milk that I started freezing. I didn’t try to put her to the breast and started to relax. I cut down my pumping as the prescription was helping maintain supply. I started to feel happy, even though I was sad about not nursing.

A week later I couldn’t help it and I tried again. This time when she latched I thought I could hear milk swishing in her mouth. I had never heard that sound before. I went to the lactation consultant again and they determined she drank half an ounce in 30 minutes. Not much, but a start. I then devoted the next week to all-day nursing.

Mia nursed round the clock in order to get enough milk at such a slow rate. I gave her a bottle at night to make sure she got full. The next week she was up to three ounces in 30 minutes, and the next week four. We made it. Mia was still nursing for 45 minutes every hour and a half, but she was nursing! I kissed that pump goodbye!

When Mia was 15 weeks old, she nursed for about 45 minutes every one to two-and-a-half hours. She didn’t sleep long at night because she woke up for frequent nursings. With bottles she was almost sleeping through the night. But seriously, who cares? My girl has finally come around and hasn’t had a bottle in over three weeks. I don’t think I will ever offer her one, I don’t want to risk losing what we’ve worked so hard to attain. She is officially a Boobie Monster!

“What we have today was worth every tear.”

My advice to anyone and everyone who plans to breastfeed is to take as little medication as possible during and after your delivery, and to make nursing a top priority. Don’t let anyone tell you not to worry, we can try later. Work on it until you get it. Sleep can come later! Also, don’t give up on your worst day.