Does your teenage son have days when he just explodes? If he’s having a tantrum and acting more like a toddler than a teenager, here’s what you need to know about restoring calm — his and yours. 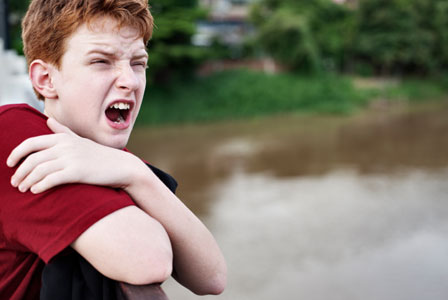 They say that a boy’s heart belongs to Mama, but what happens when your sweet little son turns into a temperamental teenager? Moms may think they dodged a bullet by having a boy — until one day their teenage son acts like a girl with a serious case of PMS. Or even worse, a 3-year-old.

You’re not the only mom who may wonder what to do when your teen son acts out — or how to stay calm when you’re about to have a tantrum, too.

Learn strategies for helping your teen make an attitude adjustment>>

How to tell him to cool it without losing your cool

Remember when your teen was still a loving little boy who sometimes acted out? Chances are you tried your best to stay calm and told him that wasn’t the ideal way to behave.

Getting angry with your teen may cause three things to happen that can make matters worse, according to Walfish:

Dr. Fran Walfish, psychotherapist and author of The Self-Aware Parent suggests using a similar approach with your teen.

She explains, “Hormones definitely accelerate your teen’s impatience and attitude. The best way for parents to stay calm when their teen is acting out is to have a plan prepared in advance so they can act — rather than react — quickly instead of falling into the same old trap of repeating demands over and over and losing their angry temper.”

How to make teen punishments count>>

Walfish explains, “If parents truly invite and encourage their teens to express anger and opposition directly using respectful language it can avoid their ‘tantrums’ and rage-filled meltdowns. However, many teens, especially emotionally immature ones, occasionally have a screaming fit if they don’t get what they want. When this happens it’s best to say with empathy, ‘I see how angry you are and it’s fine if you want to scream about it but I can’t let you control the house with all that noise. So, you can go in your room and scream all you want. Please come back and join us after you’ve calmed down.'”

Yes, teen boys are hormonal and may disagree with mom a lot. But if it goes beyond a teen tantrum, there may be cause for concern.

Walfish cautions, “If your teen begins to isolate himself from the family and his friends, or remains in his bedroom all day and night that’s cause to worry. Other concerning alarms include ditching school, hanging out with the wrong crowd, changes in mood, sleep, or eating habits, and suspicion of using drugs or alcohol.”

If you can’t tame your teen’s tantrums, don’t hesitate to ask for help.

Read more about teens and emotions