SheKnows: Tell me about your husband. When did you meet? What is special about him?

Sarah: Adam and I technically met on the internet, via MySpace, but we grew up in the same town and only lived about five minutes apart when our stars finally aligned. He had seen my pictures online, thought I was cute, and asked me if I’d like to go on a date sometime. I was a little hesitant, since I’d never met him and knew nothing of him outside of his online profile. I was going to turn down his offer from fear of the unknown, but before I did, I talked to a good friend of mine about this guy who had the audacity to just ask me on a date when we’d never met. After a brief description, my friend realized she knew him, told me what a great guy he was, and insisted I give him a chance.

I agreed to meet him at a well-lit, highly visible Dairy Queen. Hehe. He was indeed a great guy, and a year and a half later, we were married on a beach in the Dominican Republic. One thing that has always astounded me about Adam is the way he makes me feel so comfortable with and about myself. There has never been anything I couldn’t share with him… he accepts me, imperfect, flawed me… and somehow it makes me better. 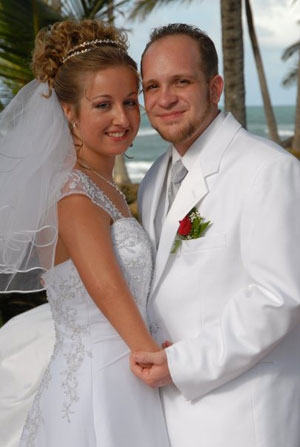 Sarah: Paradise! Our wedding and honeymoon were in Punta Cana, Dominican Republic at an adults-only resort. We drug my parents along as they were celebrating their 25th anniversary that year, and the four of us spent ten days on the beach, eating at fancy restaurants, and I even got a wonderful seaweed body wrap at the world-class spa the day before the wedding.

On our wedding day, I had my hair and makeup done, and then rode with my dad in a horse-drawn carriage to the site of the ceremony. I could hear Canon in D drifting across the resort as we rode through the palms. We pulled up and Adam was waiting there, in his white tux, a big proud smile on his face. Most of the ceremony is a blur in my mind, but isn’t that how dreams are? If I had it to do all over again, I wouldn’t change a thing.

Becoming (and being) a mom

SheKnows: What was the first thought that went through your mind when you found out you were expecting a baby?

Sarah: I remember thinking how excited Adam would be (in reality, he gave me a blank stare and said, “Are you serious? Wow.”). And then I was nervous to tell my parents. I wasn’t sure how they would react.

SheKnows: What was the most challenging thing about being pregnant?

Sarah: Toward the end of my pregnancy, daily tasks became extremely difficult. I mean, it’s hard enough getting your foot up to your face to brush your teeth, eat, or do your makeup — imagine doing that with a watermelon in between. All the ab work my life requires pushed the baby into my spine, and caused a lot of back pain. At the end I could barely drive and could only eat a couple bites at a time.

SheKnows: How was your birth?

Sarah: I had decided I wanted a natural birth, and for that reason chose to deliver at a hospital about 45 minutes away, which my doula recommended. My husband works an odd shift, he usually gets up at 2 a.m., and at about 1 in the morning I woke him up because my contractions were about seven minutes apart. I wanted to look good for my “look, we had a baby!” photos, so I immediately hopped in the shower. I only got as far as wetting my hair and smearing my makeup all down my face before the contractions got so intense I couldn’t stand. I got out of the shower, and a couple minutes later my water broke.

We called my parents to give us a ride to the hospital, and the entire 45-minute drive, my contractions were three minutes apart. My mom had attended birthing classes with me since Adam was working, but during that car ride, I felt like if anyone touched me or breathed too loudly I might start screaming profanities. At them. I never did, thank goodness, but I do remember telling my doula to be quiet, haha.

I was beginning to question my desire for a natural birth, and even tried persuading God to make it stop, but we arrived at the hospital and I was already dilated to an eight. It was happening, and it was happening naturally. They didn’t even attempt an IV after I weakly protested. All that back pain was worth it in the end… my abs had stayed in great shape, and my last push was not even with a contraction.

From start to finish, my entire labor was three-and-a-half hours, and I didn’t have so much as a Tylenol in my system when my beautiful, bright-eyed Ethan was born. I didn’t exactly look refreshed and flawless for the pictures, with the streaked makeup and frizzed-out hair, but I felt so good I couldn’t sleep for another 24 hours. It was euphoric. 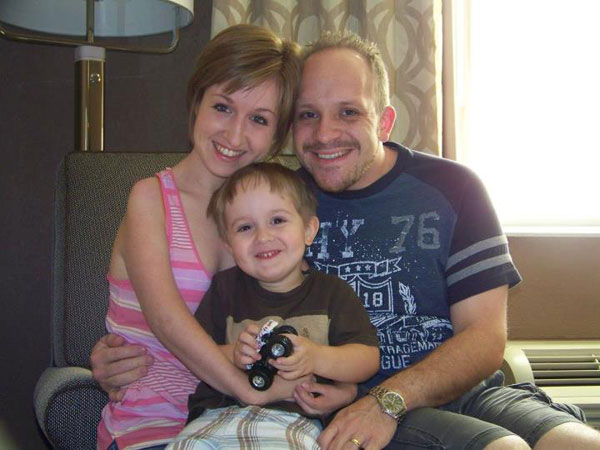 SheKnows: You don’t strike me as the type to ever say, “I can’t.” Has anyone doubted your ability to care for your child? If so, how did you respond?

Sarah: I got a lot of questions about how I would do things when I was pregnant. I even had some people tell me flat-out what I wouldn’t be able to do. But now that he’s here, and obviously we’re doing just fine, people don’t question me. There are times when I am unsure of myself, and it really tests my trust in God’s protection.

For example: I have avoided taking Ethan to the park by myself because I can’t support him if he decides to climb something. I can only reach so far, and then he’s on his own. The thought terrified me. He’s almost 3, and we’ve only used a band-aid once… I’m the definition of a nervous mama (possibly because when I was little, falling down meant broken arms… it happened seven times). So watching him climb those little ramps on the playground equipment is terrifying for me. Once he’s more than three feet off the ground, he’s on his own.

But the other day, I decided I would take him, and of course he makes a beeline for the climbing ramp. I just stood there and prayed. I tried to remember that there are ways that he’s stronger than me (hard to grasp sometimes), and that God wants the best for him even more than I do. He climbed it three times, without a single slip.

I want him to grow up knowing that I trust him, that he has every reason to be confident, and nothing to fear. The loudest doubts have always originated in my own mind, though obviously I hide it well. It’s a constant battle to stretch myself to try the things that scare me, things I may fail at, things that may make a fool of me. My son is fresh motivation to keep growing in that way. I don’t want to set an example of fear.