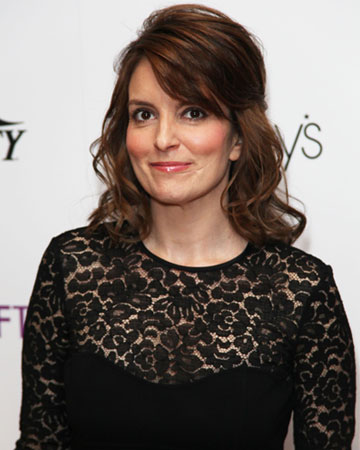 The tremendous success of Fey’s memoir (selling over a million copies) is no doubt due to her honest and humorous attitude about motherhood — evident in the poem in her book, “The Mother’s Prayer for its Daughter.” So have Fey’s prayers for her daughter been answered?

“The Mother’s Prayer for its Daughter”

In Bossypants (now in paperback), Tina Fey spells out what she hopes her older daughter, Alice (and presumably now also her second daughter, Penelope, born in August 2011) will not do in her teen years. Here’s a portion of the equal parts comedic and touching poem to her daughter that has resonated with many moms:

First, Lord: No tattoos. May neither Chinese symbol for truth nor Winnie-the-Pooh holding the FSU logo stain her tender haunches.

May she be Beautiful but not Damaged, for it’s the Damage that draws the creepy soccer coach’s eye, not the Beauty.

When the Crystal Meth is offered,

May she remember the parents who cut her grapes in half

And stick with Beer.

Read “The Mother’s Prayer for its Daughter” in its entirety >>

So, have Fey’s prayers for her daughters been answered?

Fey, pregnant at 40, writes in Bossypants, “Do I look like someone who should be pregnant? I look good for 40, but I have the quaggy jawline and hollow cheeks of a mom, not a pregnant lady. It’s now or never. This decision can’t be delayed.”

Talking herself into baby number two Tina Fey continues, “What’s so great about work anyway? Work won’t visit you when you’re old. Work won’t drive you to get a mammogram and take you out after for soup… Hollywood be damned. I’ll just be unemployable and labeled crazy in five years anyway.”

Alice, now 6 years old and Penelope, 10 months are still so young that it’s obviously far too soon to tell if they’ll want to get tattoos or have a penchant for wine rather than beer.

But what is clear is the Saturday Night Live alumna and creator and star of NBC’s hit show, 30 Rock is showing her girls a fine example of what a mother should be proving to be successful at — well — everything she does.

Bossypants rested comfortably in the top spot of the New York Times bestseller list for five weeks and stayed on that list for well over twenty consecutive weeks. And over a year since its release, its still proving to be a success. Most recently, Fey received Audie Awards for Audio Book of the Year and best Biography/Memoir for her narration of Bossypants.

It’s highly unlikely Fey’s career will be over any time soon. Among other projects, she’s set to co-star in next year’s Admission with Paul Rudd.