It’s already a sad story when someone is addicted to painkillers, but the impact is infinitely worse when a baby is born hooked on meds.

Related story Dax Shepard Wants His Kids to Do Psychedelic Drugs — But Should They? 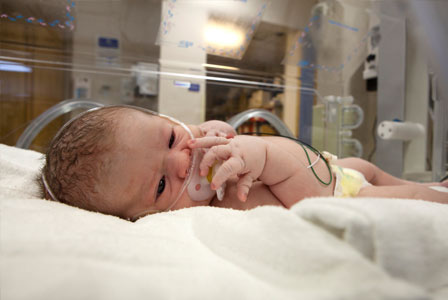 Researchers are seeing a new and disturbing trend amongst newborns: Addiction to painkillers. Americans’ increased reliance on these prescription painkillers has resulted in our babies being born addicted.

One addicted baby born per hour

These newborns lie helpless in an incubator shaking, gasping for air and unable to eat. This image isn’t a Lifetime movie meant to scare teens straight when it comes to prescription meds. It’s the new reality of more and more Americans abusing pain pills and innocent babies getting the short end of the proverbial stick. A new study released recently by the Journal of American Medical Association found that one baby, hooked on prescription painkillers, is born every hour in the U.S., the number has tripled in the last decade.

In 2009 there were more than 13,000 babies born with neonatal abstinence syndrome, a withdrawal that occurs in some babies after being exposed to a class of painkillers, called opiates, while the mother is pregnant. Dr. Stephen Patrick, one of the lead authors conducting the study, said the number comes out to a startling one addicted baby born every hour in the U.S. That figure marks a three-fold increase in the number of babies born with this syndrome since 2000. The study also noted that painkillers among expectant mothers jumped five times during this period.

Patrick said he and his colleagues from various hospitals began noticing more babies in neonatal intensive care units with the classic symptoms of Neonatal Abstinence Syndrome (NAS), which include increased irritability, respiratory and feeding problems, low-birth weight and seizures. The study also noted that 77 percent of the babies with NAS were born to mothers who were on state Medicaid.

“Recently, the Centers for Disease Control and Prevention released a report which found that over the last decade sales for opiate pain relievers like OxyContin and Vicodin have quadrupled,” Patrick told Science Daily. “Although our study was not able to distinguish the exact opiate used during pregnancy, we do know that the overall use of this class of drugs grew by five-fold over the last decade and this appears to correspond with much higher rates of withdrawal in their infants.”

The Science Daily reported that in Florida, where death from painkillers now outnumbers those caused by illicit drugs, the number of newborns diagnosed with the syndrome has also increased five-fold in the last six years.

“There has been an incredible increase in the number of opiate pain relievers prescribed in the U.S.,” Patrick said. “We think that might be part of the increase we are seeing.”

Healthy pregnancy: Can you have one in your 40s?
FASD: Are you pregnant and still drinking?
Spa treatments while pregnant: What’s safe?

39 mins ago
by Thea Glassman

8 hrs ago
by Kyunghee Kim