What were on the minds and Twitter feeds of some of our favorite celebrity moms? Gwen Stefani shared some cool mom photos and birthday wishes, while Kristin Cavallari wrote about her baby shower. Nicole Richie debuted her new pink hairdo, while Pink tweeted about her disappointment over missing the dinner with President Obama due to gallbladder surgery. Jillian Michaels and Cindy Crawford round out our pick of the top celeb mommy tweets of the week. 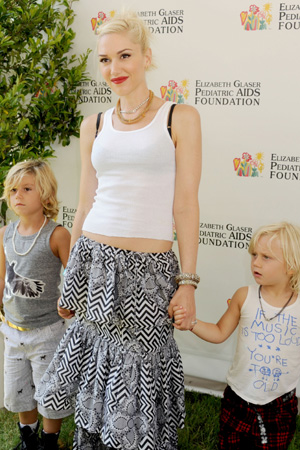 Gwen Stefani prefers tweeting photos over words. Most of the photos are of her No Doubt bandmates or photos of her, looking fabulous. For example, check out this recent tweet labeled “hair do” in which she linked to this photo of her looking amazing with a cool twisted ponytail.

She did, however, wish her son Kingston (pictured here with little brother Zuma) a happy birthday, and included hubby Gavin Rossdale in the tweet.

She also wrote to some of her favorite celeb mom friends and wished them happy mother’s day.

Who knew that Nicole Richie, who is a mom to Harlow and Sparrow, is so funny?

“Listening to Lil’ Jon is so soothing” – any mother of 2 toddlers,” she tweeted one day.

“All of my married girlfriends COMPLETELY trust me around their husbands… & now I’m kind of offended,” she wrote another day.

“I’m gonna dress up as an iPhone so my husband pays attention to me,” she joked, referring to her rocker husband Joel Madden.

“Remember when your mom used to say ‘You’re too smart for your own good’? Remember when she stopped?” she mused one day.

She also tweeted her own mother/son photo referring to E!’s “B**tch Stole My Look” segment, in which two celebrities are wearing matching outfits.

“PHOTO: “B!$&h Stole My Look” starring Sparrow Madden,” she tweeted, with this cute photo of them both with major bed head.

And, on a style note, Richie has pink hair! “PHOTO: TICKLED PINK!” she wrote, with a link to her new pink hairdo. 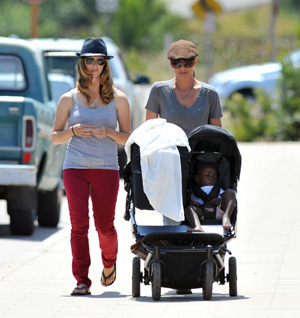 Jillian Michaels surprised fans when she not only came out as a lesbian, but also revealed that not only had she adopted a child but her partner, Heidi, just gave birth to a baby boy named Phoenix. The couple, pictured right, were recently spotted out with their kids.

“I agree. Sadly, it was an interview before phoenix was born and Lu was home. We couldn’t share the info until all was completed,” responded Michaels.

“Attempting 2 reclaim my inner badass after mommydom,” Michaels later tweeted. “I went 2 fight class & promptly walked into left hook,” she wrote, linking to a photo of her with a black eye. ?

“Jillian was wandering what your intake on HGC drops on losing weight is? A coworker is taking them are they safe?” tweeted one follower.

“NO! please don’t do that. just eat right and exercise,” Michaels responded.

She also tweeted her disappointment over missing President Barack Obama’s fundraiser because she had to have her gallbladder removed.

“I’m so bummed i can’t perform for The President of the United States this Wed night. Thanx @darrencriss for filling in for me!!,” she tweeted. “So now I’ve let down my daughter and the President. wow. great week. oh and p.s….. F YOU gall bladder! SAYONARA!!!!!!!!!!!!”

“Willow just got a Gucci dress and a custom rocking chair for her birthday, plus some Toms, so it ain’t all bad. lucky little girl,” she continued. “i think i got a bag of cheetos and a teddy bear for my 1st birthday.” 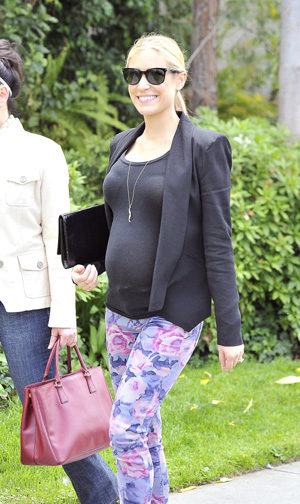 “Off to my baby shower. U guys like my dress?!,” tweeted Kristin Cavallari, with a link to a photo of her wearing a black dress holding her cute baby bump.

Later, Cavallari, who is the brand ambassador for Chinese Laundry, tweeted about her shower. “Loved my baby shower! Am blessed w/grt friends. Fantastic party faves – adorb sandals,” she tweeted, with a link to these cute Behave Chinese Laundry shoes.

She also responded to one follower who wrote, “I feel like @KristinCav has been pregnant for…. Forever! When is she due?”

“I have a couple more months!” responded Cavallari, who is pregnant with her first child with fiancé Jay Cutler.

“Kaia’s 5th grade graduation 2day!,” tweeted Cindy Crawford. “Any other moms out there buried in last week of school activities? Don’t know who is more ready, me or kids!”