Kids are resilient creatures, but when it comes to accidents involving their noggin, don’t dismiss concussions in teens. 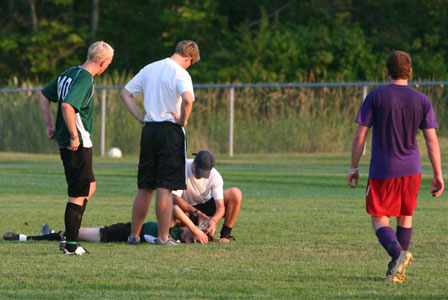 According to a study published in the journal Brain Injury, teens may be more sensitive to head trauma than adults or children in any other age group. So, before you tell your teen to shake it off, uncover the reasons why Canadian researchers have found teens suffer more when it comes to concussions.

What is a concussion?

Concussions and sports may be synonymous, but it doesn’t mean you shouldn’t worry when your teen knocks his cranium or worse, loses consciousness after a head trauma. “Concussions are a result of a traumatic brain injury causing a physiologic disruption of brain function,” explains Dr. Ryan Coates, pediatric neurologist and assistant professor at Loyola University Chicago Stritch School of Medicine. “They typically result in a temporary impairment of neurologic function which is manifested by a multitude of symptoms including headache, loss of consciousness, concentration and memory disturbances, dizziness, nausea/vomiting, and confusion.” And, you may be surprised to learn that age does matter when it comes to an injury involving the head.

In a report published in the journal Brain Injury in February 2012, teenagers who suffer concussions are more sensitive to the after-effects. Researchers compared nearly 100 athletes who had suffered a concussion three to nine months before testing, dividing them into three age groups and comparing with similar participants who were not previously injured by a concussion. All study subjects were then evaluated using a U.S. National Hockey League neuropsychological tests along with electrophysical evaluations measuring working memory, attention and inhibition. Researchers found participants in the teen group who suffered concussions suffered electrophysical effects as well as short-term working memory lasting six months to a year more-so than either of the other two groups.

So, why are teens more susceptible to suffering after a concussion? According to Dr. Leslie R. Matthews, M.D., Morehouse School of Medicine, a concussion can affect short-term memory which includes concentration, reading and focus in teens because, “the brain of a teen grows rapidly and in spurts as compared to a baby or adult brain, according to Canadian researchers. Therefore, a concussion in a teen usually affects the frontal lobe which is even more fragile and sensitive to injury than a baby or adult brain.”

Is your adolescent accident-prone? >>

Whether or not your teen loses consciousness after a head injury, symptoms of a concussion may not surface for days, or even weeks, after the injury. Unfortunately, the condition is severe regardless of the symptoms, and when concussions are involved, always do damage of some sort. So your best bet is to take your child to see a medical professional who can assess your youngster’s readiness to head back into the game following a head trauma.

Head trauma? Look for these signs your child may have a concussion >>

Although you may be tempted to wrap your teen in bubble wrap, you shouldn’t fear having him or her compete in sports or physical activities. So long as you don’t dismiss concussions in teens, simply teaching your child the best way to dodge the suffering that comes along with an accident involving their noggin — such as wearing a helmet — before sending your kiddo out on the field or court can be your teenager’s best defense against concussions.

Check out more tips on teens

Helping your teen lose weight
Teens and body piercing: What all parents should know
Should you pull your teen from the team?