A recent study released by well-known sociologist Mark Regnerus claims that children of gay parents aren’t as well off as their peers with heterosexual folks. Is the study right on, or fundamentally flawed?

Mark Regnerus, a sociologist at the University of Texas, has released a study, with research stating that children of homosexual parents are less happy, less employed and suffer long-term relationship instability — when compared to children of heterosexual parents. With at least one major flaw, his study has come under fire by not only LGBT political groups, but social scientists as well.

From 1979 to 1994, Regnerus reached out via a questionnaire and asked over 15,000 18- to 49-year-olds if their mother or father had ever been in a same-sex relationship. Respondents were sorted into various categories, such as “Lesbian mother,” “Gay father” and “Intact biological families.” The questionnaire asked these adult children about different factors in their lives, such as mental health, employment history and relationship status.

The study’s biggest downfall? Most of the kids of gay parents came from a broken home — for example, a divorce after one parent came out of the closet. Kids from homes where there were huge changes and upheaval are, across the board, more prone to experience relationship issues themselves, as well as seek treatment for depression or anxiety as adults. There was virtually no data that came from a child of a two-parent gay family, so the comparisons between kids in each category simply weren’t equal. 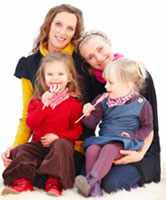 Regardless of the inequality of the research, many feel that the data and the conclusions prove what they’ve felt all along. “Just as gays have a right to marry, kids have a right to a mother and a father — all other forms of parenting including single parents, gay parents, polygamous families — are less than ideal,” shared James, a commenter on The Daily Beast.

Some folks feel that the study overall is agenda-based, particularly in light of the fact that the data isn’t equal amongst the groups studied.

“Flaw?” asked another commenter. “If the ‘study’ doesn’t compare two of the same categories, it is simply nonsense and is not worthy of discussion. All too typical of the inanities that pass as social ‘science.’”

Another commenter agrees. “It’s very important to remember that Regnerus promotes socially-conservative agendas and outcomes on any research he does, automatically making it suspect,” he wrote.

Another issue some are taking is with the age of the data itself. Modern families with gay parents are likely lightyears ahead of those of the past, with more areas legalizing gay marriage and more of the public becoming open-minded and accepting of gay parenting. “Maybe kids of gay parents have issues because their parents are persecuted,” explained another poster. “Doesn’t take a rocket scientist to figure that one out. So why don’t we just accept their relationships instead of vilifying? Then the kids would be all right.”

While those who oppose gay marriage and gay parenting might use this as proof that children of homosexuals don’t have it as well as their traditionally-raised counterparts, this research really must be taken with a grain of salt.