Some studies estimate that Sensory Processing Disorder affects at least one in every 20 kids, and potentially as many as one in every six. Meet real kids and learn how SPD has affected their lives and their families. 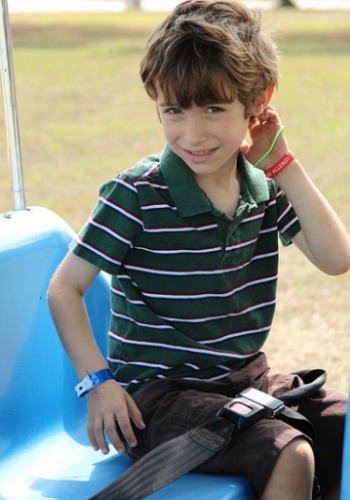 Maria Mora is a blogger, author and mom to two boys.

When Simon turned 3, he spent the party under a table, crying. That year he had so many meltdowns I felt like we were both losing our minds. The strangest things upset him. He hated water on his face, had to take tepid baths, screamed over certain textures, went absolutely bonkers in crowded rooms. He was shy and clumsy on playground equipment and struggled to throw and catch.

I felt so sick and sad for him, seeing my sweet little toddler seem to feel real physical pain from stimuli I couldn’t understand. It wasn’t until he was 4 that I discovered SPD and asked his pediatrician about it. Within a few weeks, he was evaluated and found to have severe sensory dysfunction. Through lots of occupational therapy (OT), he’s become a different child. Now, at 6, he can cover his ears when he’s upset. Sometimes (not always) he tries new things. If you’re at the beginning of this journey, know that it does get better. There’s a lot of help out there and as you play around with various therapies you’ll figure out what works for your child. You might not always approach family activities in a totally carefree way, but it will get so, so much better.