Happy Wednesday Hump Day — also known around here as Celebrity Baby Bump Day! We have rounded up the cutest pregnant celebrities of the week, including Sienna Miller showing off her cool boho baby bump and Snooki showing off her Jersey Shore style. Moving on from Snooki to Sookie, Anna Paquin and Stephen Moyer gave us a peek at her True Blood baby bump at the premiere of their hit HBO show. Pregnant actress Neve Campbell was spotted at the Coldplay concert, while a very pregnant Kourtney Kardashian is counting down the days — however still managing to look chic!

Related story Did Travis Barker Have a True Romance Wedding With Both Kourtney Kardashian & Shanna Moakler? 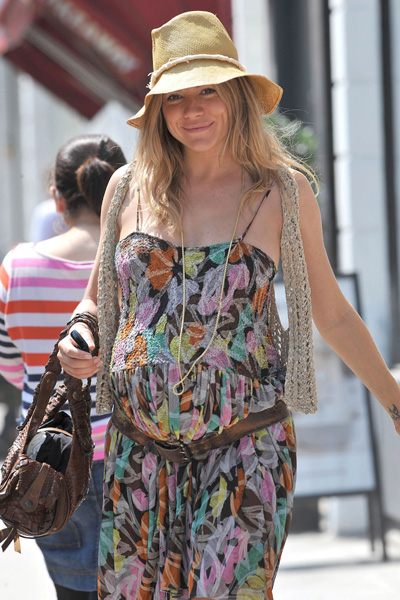 Pregnant actress Sienna Miller showed off her cool bohemian style as she ran errands in Primrose Hill in London, England. The 30-year-old is expecting her first child with her boyfriend Tom Sturridge.

We love Miller’s maternity style, in which she often mixes chic basics with trendy accessories for a cool pregnancy look. Take a maternity fashion tip from Miller and give your body more definition by belting flowy dresses or long tunic tops, especially when you are in your third trimester.

No official word on the sex of the baby, however Miller was spotted leaving her baby shower in London with presents and pink balloons. Hmm…

Next up:  Pregnant Anna Paquin vamps it up at the True Blood premiere